When Antiochus III took the throne in 223 BC he undertook a series of campaigns to bring disobedient vassals under control. The final campaign was fought against Greco-Bactria. The Greco-Bactrian list has an option for an all mounted command for which this will be fielded for one game.
II/19b Seleucid
1 x general (3Kn), 1 x xystophoroi (3Kn), 4 x phalanx (4Pk), 1 x elephant (El), 1 x scythed chariot (SCh), 1 x thureophoroi (4Ax), 1 x Galatian (4Wb), 2 x archers and slingers (Ps).

Game one
Antiochus III found the Bactrian deployed at the base of one hill with pike and elephant in centre and cavalry placed on both flanks. Massing his cavalry on the right, Antiochus deployed his army in a similar manner but with auxilia and psiloi supporting the phalanx on both flanks. 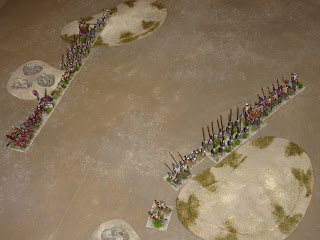 The right wing of each army pressed forward ahead of their respective phalanxes. 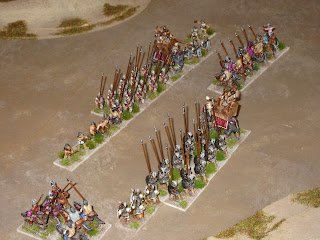 After the dust cleared from the initial clash, Antiochus was carried off the field. The Seleucid veterans accustomed to such departures carried on sending the enemy back on their heels. The Bactrian took advantage of the situation to pick off units showing signs of indecision. This cost the Seleucid dearly as their right flank crumbled as well as the right wing support of the phalanx. Score 5(g + SCh) – 0 for Bactria. 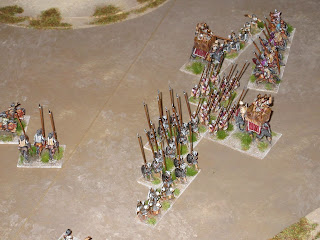 Game two
For this battle, the Seleucid deployed first on a field with difficult ground and hills positioned on one flank. Bactria, anticipating the early seizure of the hill, deployed accordingly. 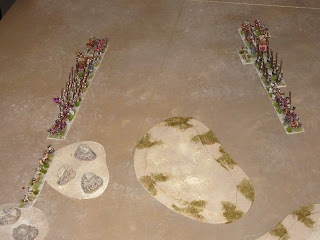 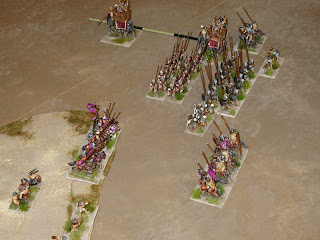 The Bactrian seizing the advantage began systematically rolling up the phalanx ahead of any cavalry assault on either wing. 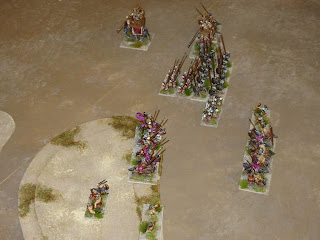 At the opening of the battle, the Saka and Arachosian light horse had made a long circuitous route to finally arrive in the rear of the Seleucid army. By this time, the Bactrian phalanx and elephant corps had cleared the Seleucid centre of all opposition. Score 5(+SCh) – 0 for Bactria. 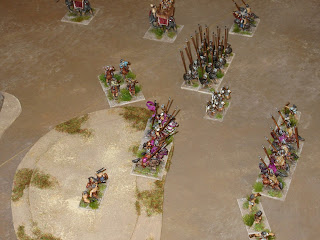 Game three
To give the Seleucid a warm send off, the cavalry arm of Bactria was brought up to fight the final battle. The Seleucid army with their left flank deployed back used a patch of rocky ground to anchor her right flank. 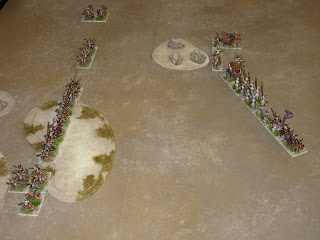 As battle lines closed the distance the Bactrian altered their line by breaking up into smaller groups to approach in echelon. Far on the left flank, the Bactrian cavalry kept the Seleucid psiloi occupied while the Arachosian light horse did likewise with the scythed chariot. 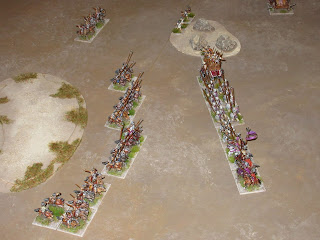 The Bactrian right struck first overwhelming the isolated unit of xystophoroi leaving the Bactrian commander and support to deal with Antiochus, both demonstrating greater perseverance by sending the Bactrian back on their heels. In the centre, the Iranian lancers slowed their pace but held the attention of the phalanx and elephant. Sidestepping the scythed chariot, the Arachosian slipped through the Seleucid defense to stand poised in the rear of the Seleucid army. 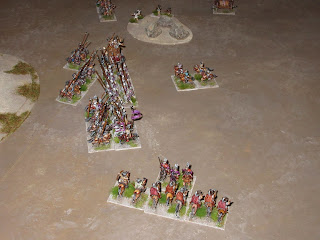 The Iranian lancers were attacked and send recoiling from the phalanx and elephant. The xystophoroi crumbled under the greater number while Antiochus and bodyguard desperately fought back a second assault sending the Arachosian back and following up a recoiling unit of lancers. 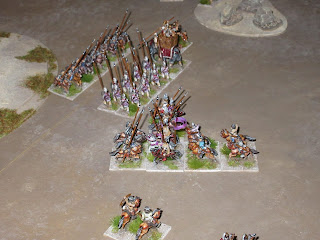 The weight of numbers and exhaustion caught up with Antiochus finally succumbing to a fatal blow. Score 4 (g) – 2 for Bactria.
Posted by Timurilank at 02:11