Game one
The Roman infantry deployment equaled that of the entire German position; however, their formations were noticeably deeper and could prove troublesome. The field between the two armies was devoid of any hindering obstacles and as a precautionary measure auxilia were placed in the wood. 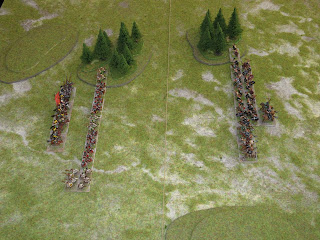 Taking advantage of the slow advance by the Germans, the Roman infantry line wheeled to the left forcing the enemy to funnel their attack, but first the wood would have to be cleared of German skirmishers. 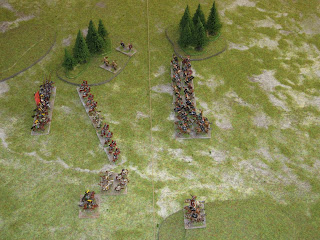 Battle lines now met and the barbarians confined in their deep formations were getting the worst of the situation. Roman cavalry reserve was moved forward to support any breakthrough made by the legionnaires. 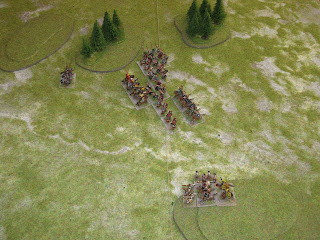 The barbarian numbers now pressed their advantage as they slew half the legionary troops. Hearing the cry of victory on the right, the commander could not notice German cavalry has successfully broken out of their predicament and would be moving to the Roman rear. The signal was given to retreat, score 4 – 3 for the Early Germans. 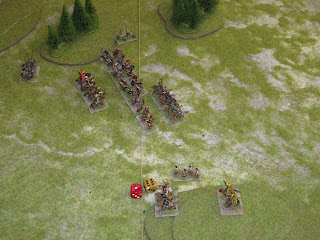 Game two
From the Roman position one could noticeably see the German line nearly matched that of the deployed legion and auxilia units. The German cavalry were dispersed to both flanks and noteworthy there were fewer columns of infantry. 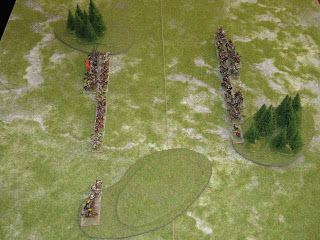 The barbarians struck first to send a shock wave through the Roman line quickly destroying a large part of it leaving frenzied Germans facing the Roman general. 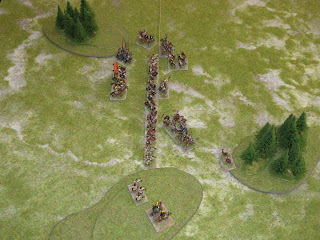 After losing another Roman unit the call for retreat was ordered leaving twice as many Roman dead as barbarians, score 4 – 2 for the Early Germans. 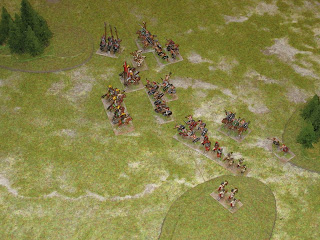 Game three
Grouping all her cavalry on the left flank, the barbarian line appeared just as long as that of Rome. 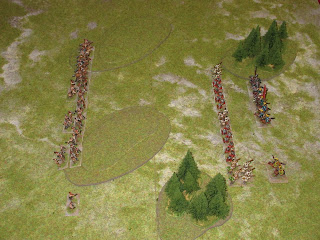 Forming two divisions, the left hand division would engage the Roman cavalry while all the German infantry would attack the legions as they climbed up the hill. This was successfully done catching the Roman line in disarray. 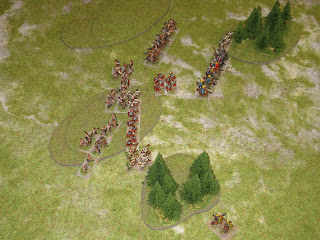 Rushing downhill the Germans breached the Roman line in a number of places; the German cavalry could add more casualties to bring the final score to 4 – 1 for the Early Germans. 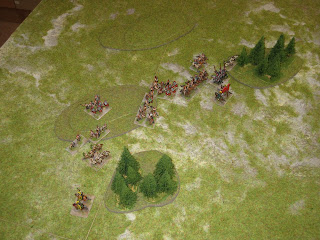