Severan Rome vs. the Hatrene

The city state of Hatra has had a long history of conflict with Rome and foiled many attempts of a siege.
That all changed with the coming of the Sassanid. As a trial, both sides form armies as listed for their side with game two, both have the option to use an allied contingent. For the Hatrene this could be the Parthian and for Rome the dubious Nomad Arab.

Game one
The Hatrene army form up with the difficult hills anchoring her right flank and infantry are evenly split on either side of the commander and horse archers guard the open desert flank. The Romans have matched the Hatrene battle line with all her infantry and behind them all mounted units are held back in reserve. 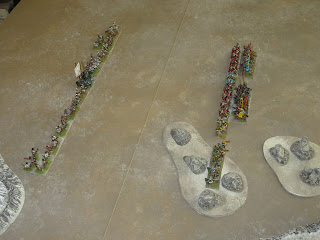 The Hatrene had planned to clear the rocky ground before moving her main formation, but signals were not clear (low pip score) as the Roman formations moved quickly into contact. 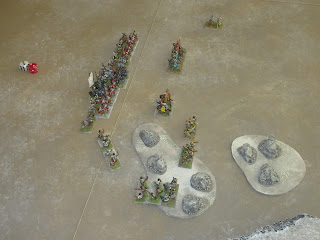 The legionnaires and their supports quickly worked their way between Hatrene units to cut down any recoiling enemy. This cost the life of their commander and other isolated units to quickly end the battle.
Score 2 – 4 for Rome. 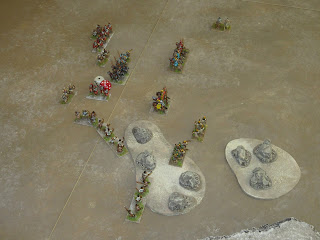 Game two
Hatra now enlisted the aid of the Parthian who supplied cataphract cavalry and horse archers. They took up a position on the right while on the left the Hatrene infantry would make use of the rocky ground and hills to harass the Roman infantry. 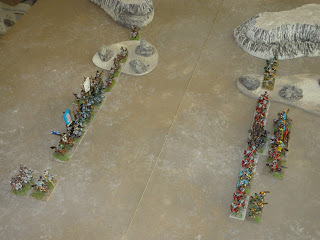 The Roman centre moved slowly forward to give her flanking units time to move into position. At this moment, the Roman light horse was challenged by Hatrene horse archers supported by camel mounted troops. 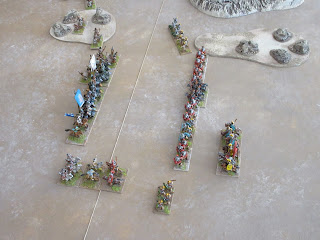 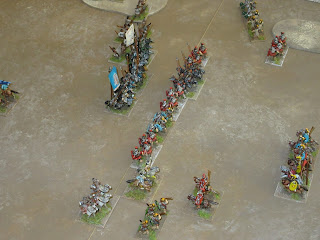 The Parthian earned their pay as they crushed several infantry units for the loss of one cataphract. The Hatrene were able to complete the victory by dispatching the Roman light horse making the score 4 – 2 for Hatra. 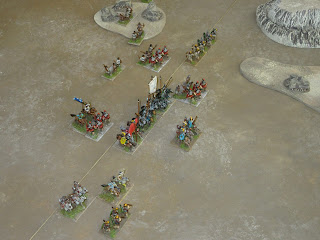 Game three
Rome defending made use of a difficult hill to anchor her right and used the majority of her infantry to extend her line to match that of the Hatrene. 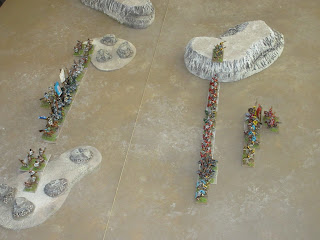 Sensing a slight hesitation among the Hatrene ranks, the Roman line moved forward in two formations while opening a space for the reserve cavalry. The extended line caught the Hatrene by surprise and decided to launch their attack ahead of the infantry preparations. 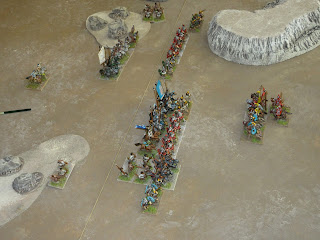 The Parthian supports lost to archer fire and auxiliary combat quickly found themselves cut off from the main Hatrene army. The struggle was desperate, but the Parthian were cut down to a man and fifteen minutes later the Hatrene commander called for a general retreat, score 2 – 4 for Rome. 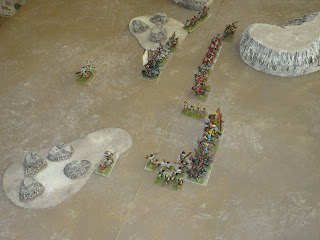