Project Rome – the Seleucid vs. the Galatian

The Celtic tribes that settled in the highlands of central Anatolia by the 3rd century BC are better known under the collective name of Galatian. They were often hired in small number as mercenaries, but a number of war chieftains did form large armies to plunder neighboring kingdoms. Surprisingly, their first contact with the empire ended in defeat when they met the Seleucid war elephants of Antiochus I.

Game one
Both armies deployed at opposite ends of the valley, but the formation of the hills meant battle lines were not directly opposite of one another. Galatia, as defender, moved first to correct their alignment. Wheeling to the right all her infantry formed a massive corps on the right with the cavalry and scythed chariots forming the left flank. 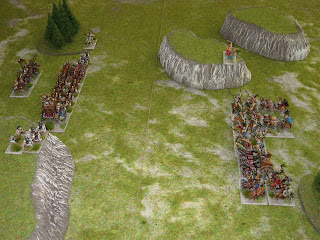 The Seleucid formed up in their classic battle formation would wheel to the left to match the frontal assault of the Galatian. Through a mishap in communication (low pip scores) the centre formation delayed their maneuver which later worked to their benefit. 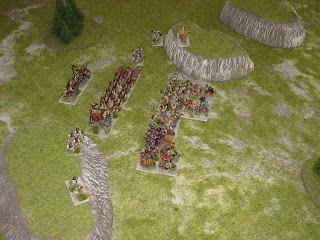 The Seleucid battle line buckled at certain spots but this was compensated by half the phalanx pushing their opponents back while the scythed chariot sliced through their opposition. 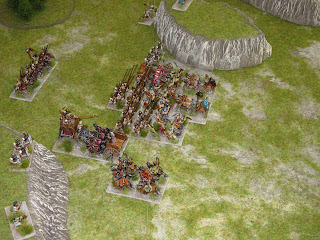 Dust clouds were thickest in the centre as the rhythmical thrust of sarissae met Galatian flesh or shield, slowly the warband resistance slackened as losses increased. One-third of the army stood as spectators as the phalanx carried the day. Score 5 – 2 for Seleucid. 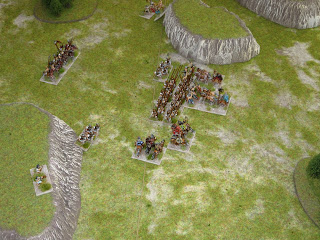 Game two
By a surprising series of die casts four of the five pieces were placed on one flank with a lone wood at the opposite end offered a smaller arena for the second game. The Seleucid shortened her front while the Galatian took advantage of the hills to mask a portion of her infantry attempting an encirclement of the Seleucid right. 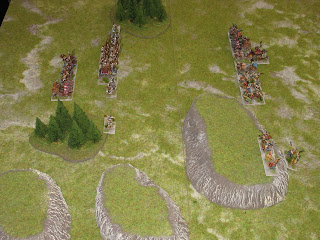 To give time for the encircling troops to arrive at their position, the main Galatian army would move slowly forward. This offered the Seleucid an opportunity to rush forward the phalanx supported by war elephants and chariots. 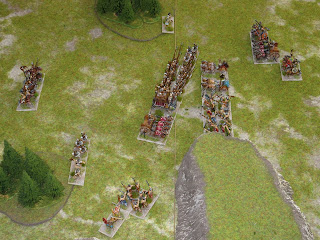 Before striking the Galatian battle line, the scythed chariot seized an advantage to wheel right and cut down a warband. 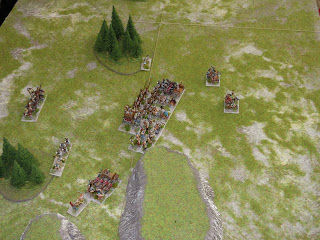 The phalanx and thorakites repeated their performance of the last game to cut down their opposition ending the game, score 5 – 0 for Seleucid. 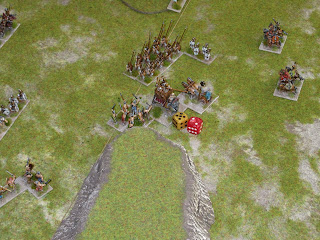 Game three
Through fortuitous die cast, the placement of terrain pieces presented the Seleucid a dilemma and so opted to deny the Galatians the use of the woods; they would later regret this choice. 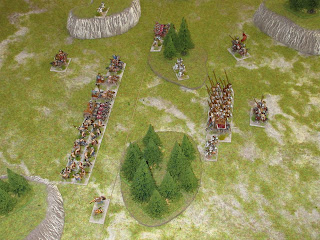 To solve the problem of communicating the Seleucid general moved to the right to signal his troops there to move off. During this time the Galatian chieftain sent groups of warband to infiltrate the wood on the Seleucid left as the phalanx remained stationary. 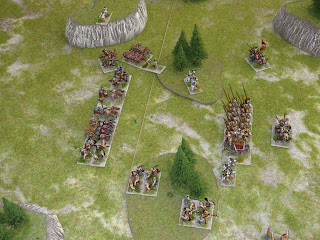 Things were not going well for the Seleucid general as he soon lost control of the battle (low pip score); the battle line was stretched thin and all reserves were now committed. 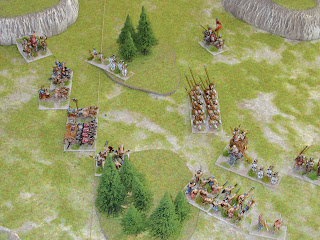 The Galatian struck with full force against the Seleucid centre and left. 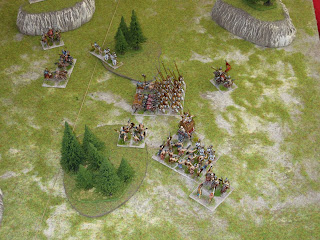 The situation turned chaotic as Seleucid troops recoiled, elephants were sent fleeing in a panic as the Galatians in their war frenzy cut down isolated units bringing the battle to an end, score 2 – 4 for the Galatian. 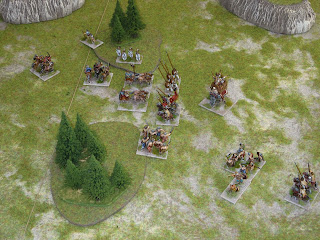