Antiochus III ascended to the throne at a young age and spent nearly the entire period of his rule at odds with rebellious satraps or leading punitive expeditions to the farthest parts of the empire. In the histories written by Livy and Polybios, Antiochus III is actively found leading his troops leaving his subordinates to care for themselves. Therefore, the 3Kn option for Antiochus III fits his characteristics perfectly as the implementation of 4Kn cataphracts into the Royal army took place near the end of his reign in approximately 200 BC.

There are six matches planned for this series of which half take place in Asia Minor, two in southern Syria and one in the east against the Parthian. The games do not reflect any chronological order but are conveniently arranged by geographical area.

Test game one
Nabataea defend and select difficult hills and wood to place hopefully as obstacles against the Seleucid, unfortunately a wealth of “sixes” gave that option to the Seleucid. Anchoring the right flank on a hill, the Nabataeans battle line stretched nearly 500 paces to end at a wood.

The Seleucid deployed in their customary “sword and shield” formation; phalanx and elephant forming the shield and the sword comprising of the cataphract and scythed chariot, both are supported by thureophoroi and light troops. 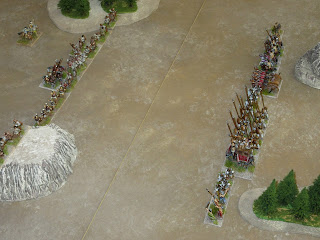 The Nabataeans wheeled their archer groups hoping to catch the phalanx in a cross fire while on the extreme flanks javelinmen and horse archers are encircling the Seleucid line. 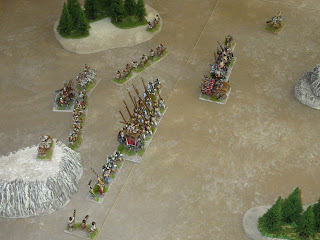 Placing trust in the support units to deal with threat to both flanks, the two wings struck. 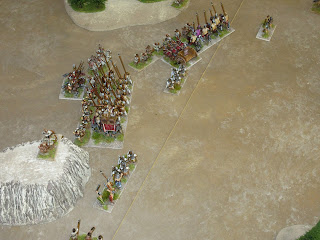 The two archer groups held their ground sending a few formations back on their heels and quickly ended the threat of the scythed chariot. 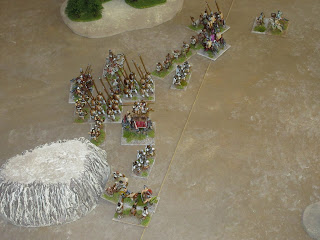 The situation took a turn for the worst when Antiochus was carried off the field leaving the entire right gone. Ignorant of the loss, the phalanx managed to surround the Nabataea King but was saved at the last moment by the timely charge of the camel guard. Score 4 – 3 for the Nabataeans. 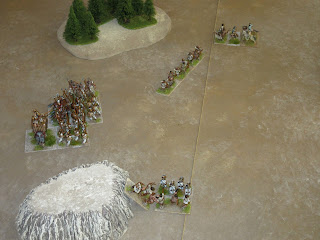 Test game two
The Seleucid, now defending a valley deployed in their familiar formation and the Nabataea emboldened by their recent victory formed up in two archer groups on either side of the king with the camel guard and horse archers forming a reserve to support the left flank. 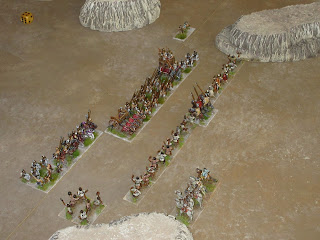 Pelted by arrows the scythed chariot had enough and retired to a safe distance, other Seleucid units were not of like mind and surged forward. Now, one element short of victory, the Greeks looked to their king to gauge the smile on his face – What? Again? 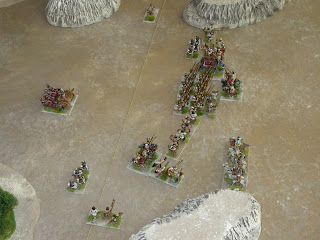 Redoubling their efforts (extra pip cost for no general on the field) the Seleucid phalanx and elephant managed to pin and eliminate the Nabataea king and broke their army. Score 2 – 5 for the Seleucid. 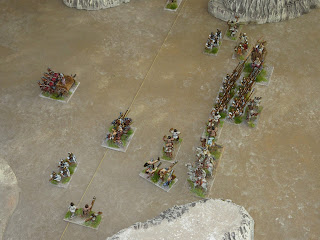 Test game three
The Nabataea, now defending, selected an ideal battlefield which constricted the Seleucid deployment.
This had a decisive outcome for the game as the two Seleucid wings could not mutual support one another and coordination became further exacerbated with a series of low pip scores. 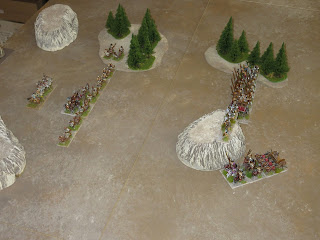 The Nabataea was quick to take advantage of the enemy indecision and moved their archers forward. 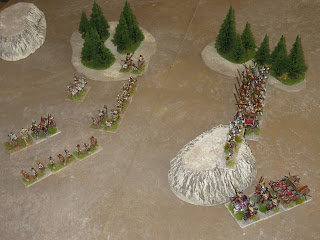 On the Seleucid bound, the elephant fled from the hailstorm and the phalanx managed to deflect the descending rain of arrows but nowhere along the line could any unit move forward. 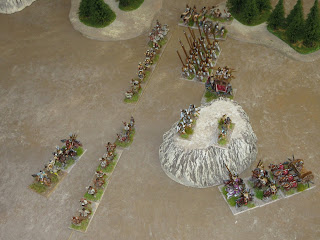 Still aching from wound incurred in two battles, Antiochus deployed his group while under fire and losing one of their numbers for the effort. The action in the centre and right flank became a confused mess with the elephant eliminated by their King and his pursuit sealed the fate of a formation of phalanx. Score 4 – 3 to the Nabataeans. 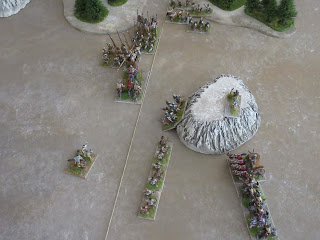