The Litmus Test
This past year my Middle Imperial Roman army have fought battles as a single, double or triple sized command against the many enemies I have collected to-date; Picts, Caledones, Marcomanni, Quadi, Carpi, Moors, Sarmatae, Alani, Parthia, Arabo-Aramean, and Sassanid. This leaves the Armenians and Pre-Islamic Arabs remaining in the queue for a thumping.

I have mentioned in a previous post how a number of rule clarifications and improvements in 3.0 have increased the tempo of the game and how this modified my tactics. Conversely, because the pace became faster I have now seen the advantages to slowing down the pace of my opening game. What may appear to my opponent as “slow” are actually the coiling moves of a viper preparing to strike.

Pip Allocation
Allocating the highest and lowest pip score to the various commands with the older version was simply a matter of which command needed to move often (mobile command) and the lowest score would go to the “reserve” command. That changed when I began looking beyond the opening moves and to where my high score would best be needed, the “middle game”.

Now the central command (CinC) receives the highest score and the smallest of the three commands, the lowest. The reasoning for this was the central and strongest command lacked the needed pips to generate decisive moves and therefore struggled to finish the game. Games subsequent to the change are much improved.

Size of Commands
Further, I began re-evaluating the effectiveness of an all mounted command. During the early 3.0 testing this command usually took a beating. I remedied this by changing the composition of the command from a purely mounted one to a mix of troop types; blade, auxilia, one archer, and cavalry or in essence a battle group. Its purpose was to delay or frustrate the opposition while leaving the other two commands to deal with the enemy. To fine tune this we did a number of training sessions.

The training sessions focused on the effective combination of troop types that needed low pip maintenance and were effective in difficult terrain. An element each of blade, bow and auxilia with an element of Psiloi dancing around and enemy flank worked well against warband strong armies. With the general and a second auxilia element or cavalry unit this becomes quite an effective command against enemy of greater strength.
Held together as a group this command can still be effective while demoralized as bow can still be effective at distance shooting and receive side support from blade. A blade’s factor may be reduced to 3, but this does not mean it is incapacitated. The fight is still on. 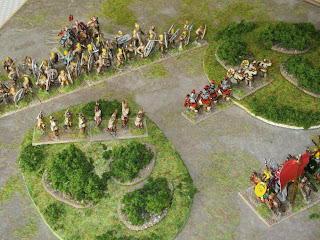 Springing Traps
I saw further improvement when I began to slow my tempo down. Light Horse and Psiloi, under the right conditions, can make extra moves and I did make use of this during the early stages of testing. As my tactics improved, I found that LH and Ps were better employed during the middle game and not launched full speed at the opening. Changing this, Light Horse have been effective at slithering between enemy commands to frustrate enemy reserve formations, or picking off a general or forming up to strike the rear of an enemy battle line. Please note after multiple moves you may not approach closer that 1BW from the enemy.

Psiloi do not move quite as far but do need the advantage of ground to do such. This is one of the reasons I have redesigned my terrain pieces as small to medium size; this reduces the chance that pieces will be discarded during the placement phase and secondly, features spaced 1 ½ BW from each other function as “stepping stones” allowing Psiloi to manoeuvre over. 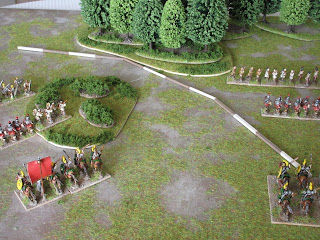 In which command will you place LH and Ps is a matter of preference and your style of game. Most Roman armies have too few LH, but I have found it useful to have them with the central command and Ps deployed with the flanking commands.

Enemy strengths and weaknesses:
The following revelations are based on the games played between the Middle Imperial Romans at its 2nd/3rd century opponents. There is one historical match up I have yet to do and that is a Civil War for which I have three western armies (S. Severus) ready to fight three eastern armies (rival claimant). To be honest, this is one match not high up on my list.

Warband strong armies, such as the Marcomanni, Quadi (solid) or Carpi, Britain (fast) should not be feared. Do keep in your mind you will lose a blade element or two as “Fortuna” has her moments. Most effective troop types to frustrate warband are Auxilia as these can go toe-to-toe with barbarians in open or difficult ground unlike the Legionnaires.

Pike armed Picts are a novelty and have the same shortcomings as warband strong armies; the use of elements to offer rear support greatly reduces a command’s frontage. By turn three, certainly four the Picts should be locked in combat with your battle line. It will soon become a shoving match and invariably the Picts will lose patience and feed their cavalry and chariots into battle. Now it is your turn to commit your reserves and finish the battle.

Auxilia and Psiloi strong armies, such as Armenia and the Moors should pose less a problem than warband armies, but great care should be taken to not lose patience as unsupported attacks may be your undoing. Such an army will more than likely defend and have terrain advantage (difficult hills) so you will have to be methodical when clearing defended ground. Archers and artillery are best at clearing ground like this.

Cavalry armies with a majority of Light Horse can pull off interesting surprises. In my collection I have Parthian and Alani armies and each time I fight against these two I remember Alexander’s counter to the Massagetae. I recommend this. Further, Auxilia are a factor 3 when fighting mounted and win on ties, so this significant change should be capitalized by a Roman player.

Cavalry armies which have Knights and I include the two types, 3Kn and 4Kn (Sarmatae, Sassan and Parthia) can be worrisome but you have more effective tools at hand, the archers and artillery. As with warband armies, be prepared to lose some legionnaires in close combat with knights, but do be ready to deal with the breakthroughs the make. Knights move just as fast as Psiloi and become nervous when confronted by a column of two deep LH.