The Roman Army (West) - the artillery and archers

The army list for the Middle Imperial Roman army have archers (4Bw) and artillery as options. These are particularly useful when fighting against the elephants or cataphract cavalry of the Sassanid.

The archers are from Old Glory as are the artillery. 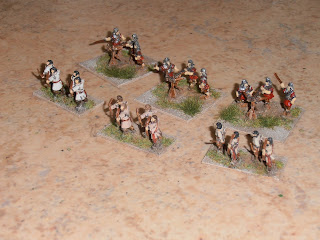