The Alan list spans a remarkable long period of time, from 50 to 1500 AD. Within the time frame of this project, the Alans are enemies to many but are allies to the Bosporan, Armenia and a 6th c. Sassan. Aside from the core of nobles (Kn) the remainder of the army is filled with light horse skirmishers. Yet, primarily a nomadic nation, the Alan may field units of blade and infantry skirmishers.

Not particularly an aggressive nation and coming from the steppe, you can expect a battlefield with low hills, but the rocky or scrub areas and a meandering river will prove useful to pin your opponents against. Steppe is also one of the few DBA geographical categories that lists a gully (another project).

The figures come from Old Glory’s Asiatic Horse list. The nobles are the Heavy Cavalry from that list and the LH are Alans both bow and javelin armed. 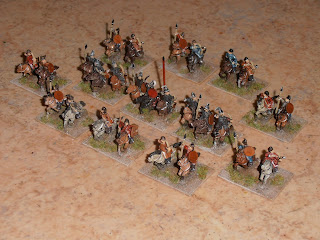 The collection has no general designated as I had been debating which type of standard to make; a banner or a dragon standard. Since then, I have constructed dragon standards using Milliput for the Sarmatians and Carpi. As these turned out very well I shall make more for the Alan and any other nomad army that may follow.