May you be blessed with many allies.

Tonight's theme continued the Sassan rebellion in 220 AD against Parthia. This would offer an opportunity to experiment with allied contingents for both sides and as we would play two commands per side, an allied contingent within each command would give us ample testing.

The battle was fought on the big table, so there was plenty of room for maneuver around five pieces of terrain, 2 x rocky ground, 2 x difficult hills and 1 x Oasis.

The deployment.
In the foreground, the Parthian CinC deployed the City State forces on the left where their archers and blade would secure the oasis. Directly behind, in a second line, was the light horse with a second reserve formation covering the open flank. On Parthia’s right the heavily armoured horse extended the main battle line and all light horse units covered the army’s open right flank. As this part of the battlefield offered little useful terrain features, the Armenian contingent were held in the second line as a reserve.

Across the battlefield, Sassan redistributed her forces giving Ardashir 14 elements including the City State forces while the young prince with the smaller command formed on the left; the noble cavalry in the second line and all the Sassanian light horse deployed further to the left to meet their Parthian counterpart. The Arab contingent was positioned to move into the area of rough ground and utilize their archery skill against the Parthians. 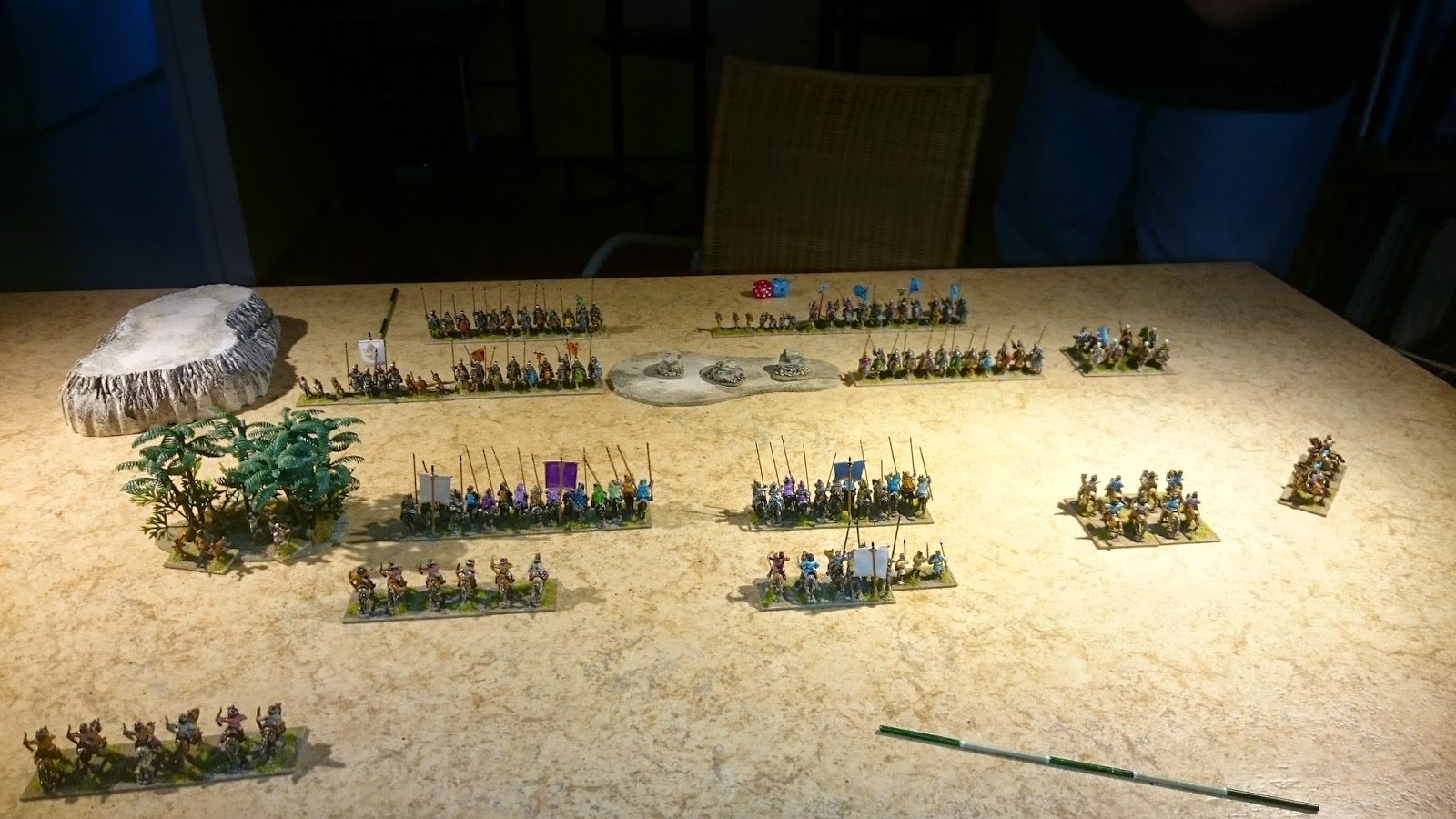 Opening moves.
Sassan, as aggressor was beleaguered with low pip throws during this phase, so closing with the Parthians would have to be a slow but well timed assault. Therefore, the original plan was scrapped and the main battle would focus on Ardashir’s effort to break the Parthian CinC’s command at the start.

This was done by positioning the City State allies first before moving forward. Subsequent bounds the line of nobles edged forward to allow Arsavan cavalry to extend the battle line. By the third bound the Arab contingent were in position to support.

With light horse superiority, the Parthians were content to seal both enemy flanks. On the left, between the oasis and difficult hills and on the right, light horse was positioned to take the Sassan light horse in flank if they moved forward. The armoured knights remained in position for several turns while this activity was taking place. 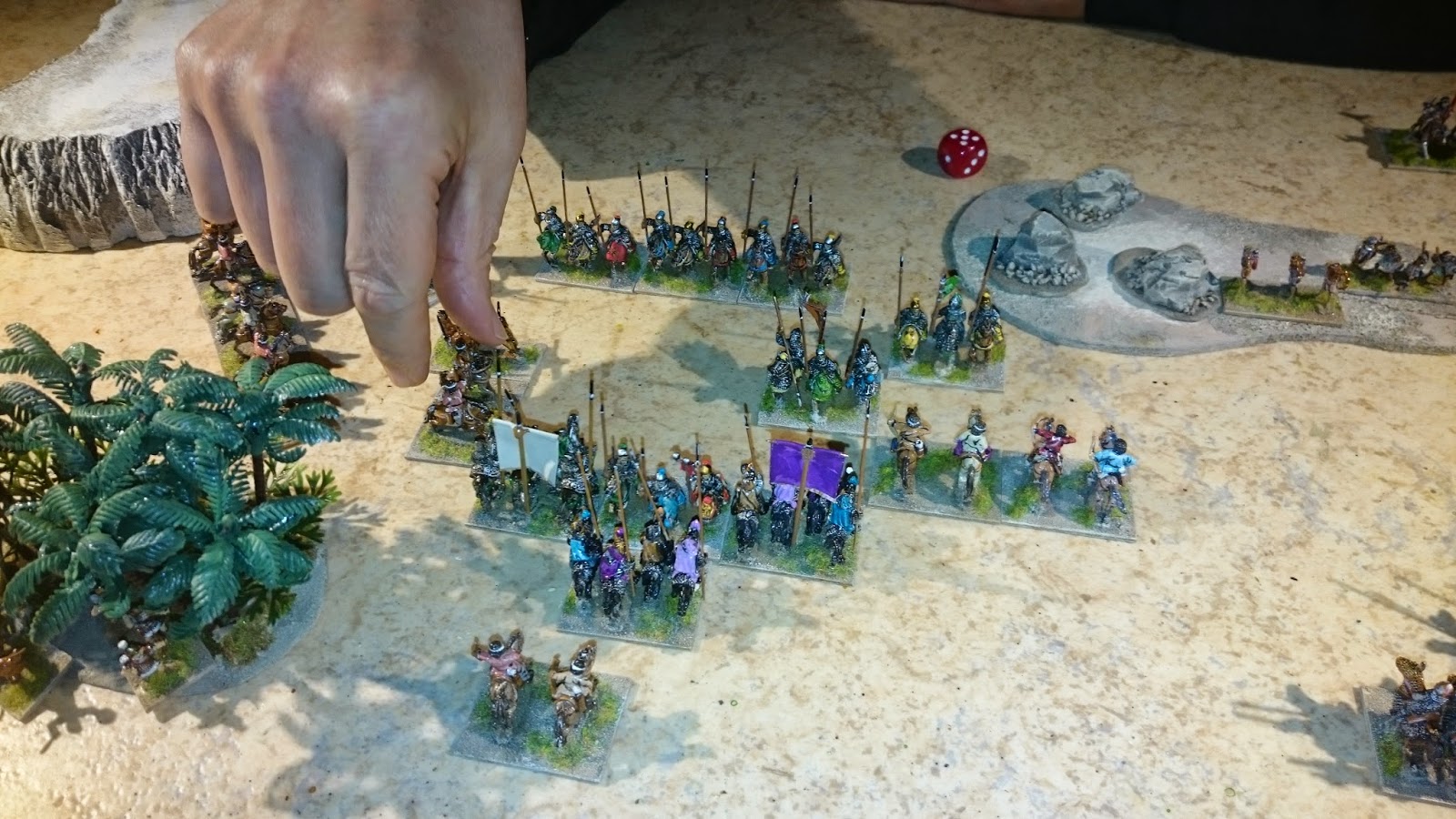 The young Prince.
On the Parthian right both sides were plagued by low scores such that the light horse were the only units to see action during the opening phase. The Parthian cataphract and Sassan Arsavan faced each other without moving.

By turn four, seeing the light cavalry of both sides skirmishing with no conclusive results, the young Prince moved his nobles from his reserve position to swing around the Arsavan line and move toward the junction between the Parthian light horse and the line of cataphracts. The waiting Arsavan cavalry would see this as their cue and move forward, just like in the movies. 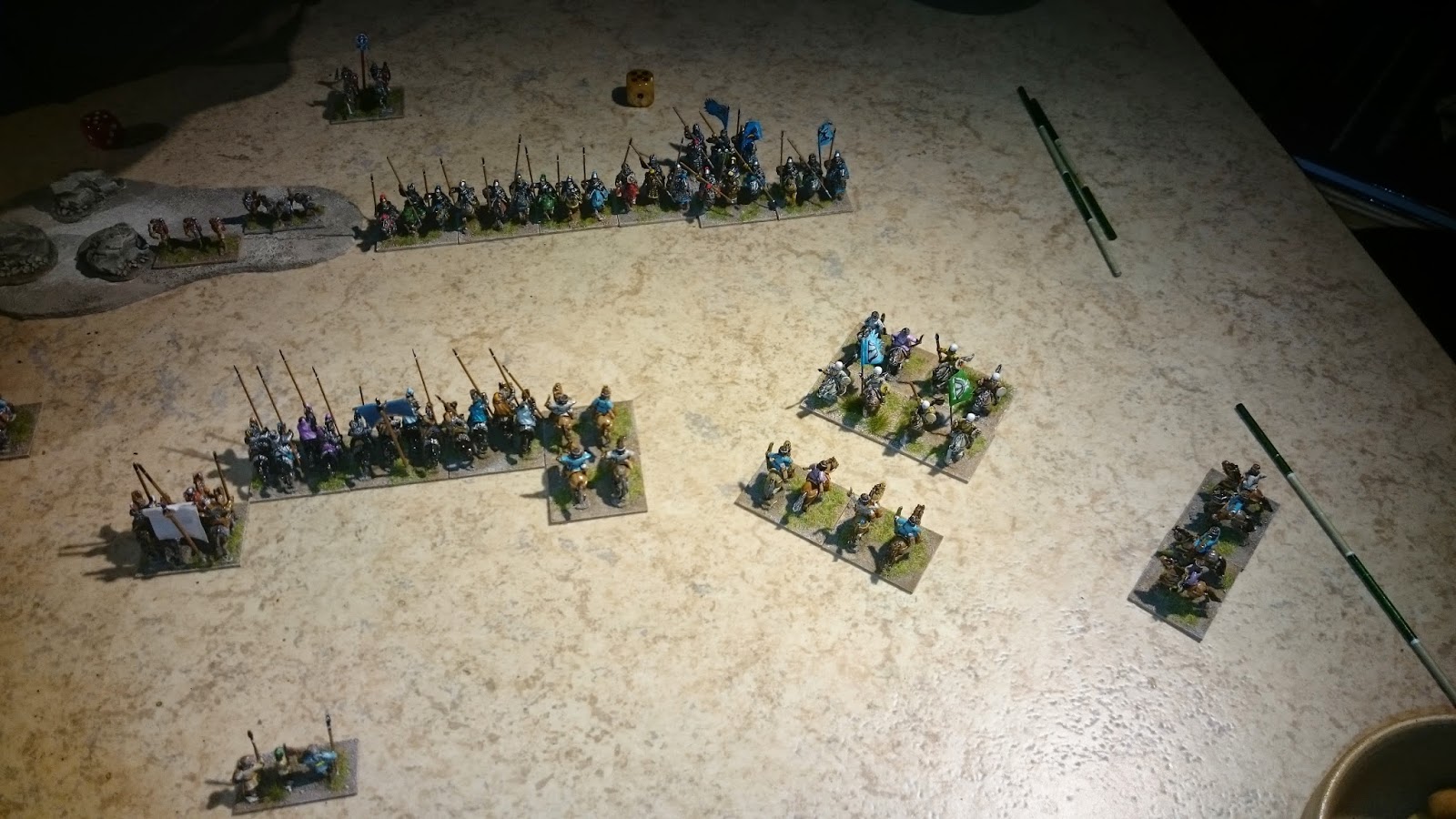 End game.
There were a number of bounds that Ardashir found himself alone facing three Parthian elements, yet each melee was successful in recoiling his opponent. The rest of the Sassan nobles were scrambling to emulate their leader, but only the name of Ardashir would be remembered in the poems.

By turn ten, Parthia was down three elements for each command and although Sassan losses were also three, his was the bigger command that would need five to reach demoralization.

The last bound saw three commands lose an element forcing Parthia to leave the field and another loss to the Ardashir’s command. The last was the only knight to recoil against enemy light horse.

An assessment.
This was a long battle which I believe took 90 minutes to complete about 12 moves. This was very different than other cavalry battles, in fact, this had similarity to a legionnaire engagement; a hard slugging match lacking finesse.

Aside from that, the allied contingent (a double dosage) experiment worked well. Adding the extra City State or Armenian cataphract to the Parthian line did not pose a problem as Jan through high pip scores for his movement.

On the other hand, I found it expedient to place the allies in one position with little need later for movement. The City State forces remained in their position fighting off Parthian LH from turn three until the end of the game. The Arabs never moved from their rough ground position, however, the archers were the only unit engaged during the battle, but they did kill a unit of Parthian cataphract and send other units recoiling back.
Posted by Timurilank at 12:17