East Francia under Charles the Fat

Charles III, the Fat was the youngest son of Louis the German and ruled as Emperor from 881 to 888. He was the last Carolingian to rule over a united empire. The re-unification however, would not last. During a coup led by Arnulf of Carinthia in November 887, Charles was deposed in East Francia, Lotharingia, and Italy. The Empire quickly fell apart after his death, never to be restored, with the Empire splintering into five separate successor kingdoms. 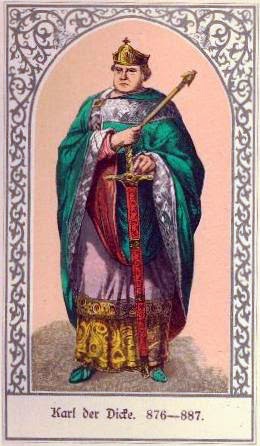 Youth
Charles was the youngest of the three sons of Louis the German, first King of East Francia, and Emma, a Welf. In AD 859, Charles as Count of the Breisgau, became involved with his brothers in a series of revolts. In 863, his eldest brother Carloman revolted against their father, followed by Louis the Younger the next year. Charles joined Louis. In 865, the elder Louis was forced to divide his lands among his heirs: Bavaria went to Carloman; Saxony (with Franconia and Thuringia) went to Louis; and Alemannia (Swabia with Rhaetia) went to Charles. Lotharingia was to be divided between the younger two.

In 876, Louis the German died and the inheritance went as planned after a conference at Ries, though Charles received less of his share of Lotharingia than planned. In his charters, Charles' reign in Germania is dated from his inheritance in 876.

In 880, Charles joined Louis III and Carloman, joint kings of West Francia, in besieging Boso of Provence in Vienne from August to September but they failed to dislodge him. In August 882, Charles sent Richard the Justiciar, Count of Autun, to take the city, which he did (in September). After this, Boso could not regain most of his realm and was restricted to the vicinity of Vienne.

Coronation and Italy
Crowned Emperor on 12 February 881 there were hopes of a general revival in western Europe, but Charles  proved unequal to the task.

In February 882, Charles convened a diet in Ravenna with a goal to have Duke Guy of Spoleto restore stolen papal lands. In a letter to Charles, Pope John claimed that the vows went unfulfilled. In 883 Duke Guy, accused of treason made an alliance with the Saracens. Charles sent Berengar, equipped with an army, to seize Spoleto. Berengar, initially successful was forced to retire as an epidemic of disease struck all Italy.

East Francia
Defeated by Alfred the Great at the Battle of Ethandun in 878, the Great Heathen Army settled in the Low Countries. Louis III, Charles' brother, opposed them with some success, but he died after a brief campaign on 20 January 882. Charles succeeded to his kingdom and reunited the whole East Frankish realm again.

When he had returned from Italy, Charles held an assembly at Worms with the purpose of dealing with the Vikings. The army of the whole of East Francia was assembled in the summer under Arnulf, Duke of Carinthia, and Henry, Count of Saxony. The chief Viking camp at Asselt was besieged and not long after Charles opened negotiations with them. The Viking chiefs, Godfrey and Sigfred, Godfrey accepted Christian baptism and Sigfred was bribed off.

From 882 to 884, the Wilhelminer War dominated the Marcha Orientalis (later Austria). Arnulf of Carinthia, Charles's illegitimate nephew, allied with the rebel Engelschalk II against Charles' appointed margrave in the region, Aribo. Svatopluk I, ruler of Great Moravia, took up Aribo's cause and, in 884 at Kaumberg, took an oath of fidelity to Charles. Though the emperor lost his vassals of the Wilhelminer family and his relationship with his nephew was broken, he gained powerful allies in the Moravian dux and other Slavic duces in the area.

In 885, fearing Godfrey and his brother-in-law, Hugh, Duke of Alsace, Charles arranged for a conference at Spijk near Lobith, where the Viking leader fell into his trap. Godfrey was executed and Hugh was blinded and sent to Prüm.

Succession matters
Charles, childless by his marriage to Richgard, tried to have his illegitimate son by an unknown concubine, Bernard, recognised as his heir in 885, but met the opposition of several bishops. After the failure of his first attempt, Charles set about to try again. Charles met the new Pope Stephen V and probably negotiated for the recognition of his son as his heir. A planned assembly with the goal to confirm Charles ‘illegitimate son as heir had come to naught as the pope refused to attend.

Matters came to a head in late 887. Family issues divided the household and his inner circle then began to fall apart. On 11 November, he called an assembly to Frankfurt. While there he received news that an ambitious nephew, Arnulf of Carinthia, had initiated a general rebellion and was marching into Germany with an army of Bavarians and Slavs. The following week his support in East Francia collapsed with the Alemanni being the last to leave him. By 17 November, Charles was out of power. Moving to Naudingen he died there six weeks later, on 13 January 888.

The spoils
The Empire fell apart, never to be restored. Arnulf desired the whole empire, but held East Francia and Lotharingia. Italy shuffled between three different claimants; Odo, Guy III of Spoleto, and Berengar. Louis was crowned in Provence, Burgundy went to Rudolph and in Aquitaine, Ranulf II declared himself king and took the guardianship of the young Charles the Simple, the Carolingian heir to the West.

Next post
We take a look at the DBA III/28 Carolingian army list and how this can best be used to campaign the dynastic rivalries and regional rebellions.
Posted by Timurilank at 01:57