Yesterday’s problem with the gatehouse is solved. The appearance dominated the rest of the structure, so some trimming was in order and secondly, the interior ground is raised and by extending that height beyond the gatehouse also helped.

From the photo you will note scraps of foam placed around the perimeter, once fixed to a base will form boulders. 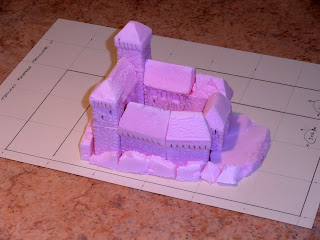 We are close to the finish line, but first some notes for myself to set a proper sequence of tasks. 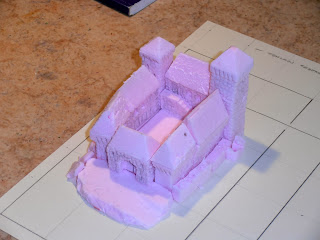 The eight structures, glue them into four groups; two towers and main hall, the two pieces forming the long side another two and the gatehouse.

Undercoating, painting and detailing the stonework for all the groups.

Roofing to be put in place. These are embossed N scale sheets from Faller or Noch.

From the courtyard and extending beyond the gatehouse to be covered with a sand/white glue mix, later painted and dry brushed.

All four groupings and elevated courtyard glue together fixed to a base.

Boulders placed and shaped to form a perimeter, painted and dry-brushed.

I will leave this project here for the moment as I must make preparations for two other figure painting tasks.

I have a Seven Year War Russian project which needs a lot of bases cut, so I will add the Castle’s base to that job. Secondly, my Sassanid reinforcements will arrive this week and I want to start planning the colour schemes for them.

Cheers,
Posted by Timurilank at 04:24