These maps should help the reader placing key locations within the Holy Roman Empire. The campaign opens with the Duchy of Bavaria, now split in four minor duchies based around their capitals of Munich, Ingolstadt, Straubing and Landshut. 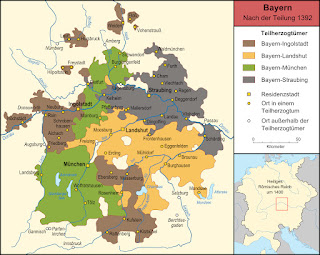 As you will note, the four duchies are clustered in diverse pockets with isolated fragments scattered in other domain. Most likely family relations account for the fragmentation, nonetheless, this does open the door to a myriad of scenarios. 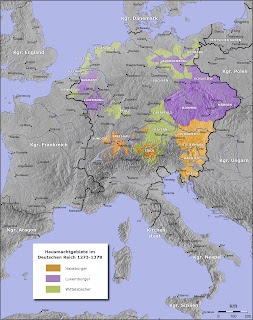 Within the Empire there are two major houses which dominate the political scene; the Habsburg and Wittelsbach. As we approach the 15th century, this map shows the sphere of influence held by both houses. While the House of Habsburg is concentrated in lands bordering Hungary and in Swabia, the domains of Wittelsbach, outside of Bavaria are scattered over a greater region to include parts of the Low Countries, the Rhineland and around Brandenburg. 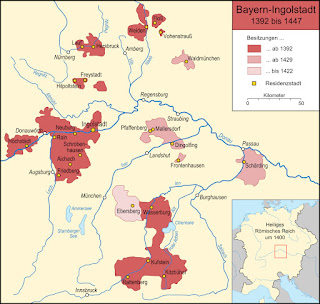 This illustrates the gradual expansion of Bavaria-Ingolstadt within one or two generations. Information is very scarce as to how this was accomplished, but no doubt this included marriage alliances, political and military force. 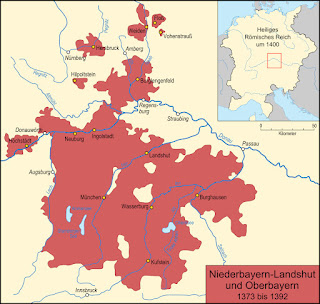 From this map you can surmise, Bavaria-Landshut and Upper Bavaria lost lands to Ingolstadt. No doubt, more information will surface when listing the cities for each of the duchies. 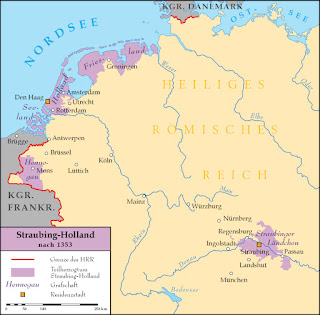 This map gives a better impression of Straubing holdings and their Grafschaften. 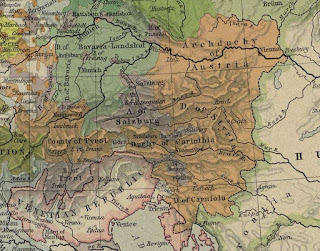 This map is dated 1477 and gives an impression of Bavarian slow assimilation of the minor duchies and the growth of Habsburg lands. Bavaria achieves complete unification in the next century and remains in the same relative size for several centuries.
Cheers,
Posted by Timurilank at 10:19