It was about this time of the year many years back, I travelled through the Northern part of Italy. The harvest period was heralded with great pageantry as processions of the city guilds in medieval costume could be seen preceded by a cluster of banners and religious articles, the long columns would wind their way through the narrow streets to gather at the city’s center. Here, the city leaders, both civic and church, would deliver their speeches bringing the festivities to a close while we made haste to the nearest café to pay our own thanks. 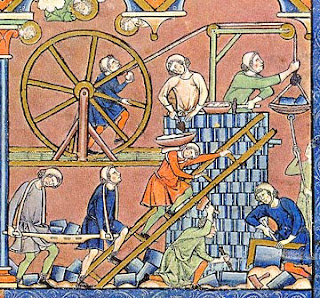 At that time, Late Medieval warfare was farthest from my game interest, yet everywhere I turned I found information about city guilds, shield blazons and banners of the era. All remained unfortunately on the book shelves as I exited the shops.


However, enough is etched in memory to serve my current need of painting an Italian Condotta army.


Many of Italy’s walled cities were a crossroad of trade and commerce and through the course of time relied less on the arms of the Feudal lords, but sought protection  by establishing their own militia and in emergencies sought the aid of mercenaries. To distribute the responsibility of defense of the city, this was divided into quarters. Each quarter was home to a number of guilds and mercantile houses, each expected to serve or support the establishment of a militia guard.


Ideally, a city’s armed force when paraded would therefore show some uniformity representing their quarter and particular guild; an early form of commercial advertisement no doubt. From mid-15th century paintings, clothing became multi-coloured with stripes predominating. 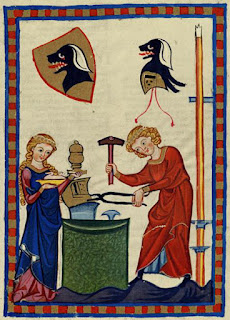 The Italian Condotta, which I shall be starting this week depict the Duchy of Trento. Located in the very north of Italy bordering Tyrol, the city of Trento is nestled in the wide valleys of the Adige River. At the start of the 15th century, the region known as the Bishopric of Trento was ceded to the House of Habsburg by the Count of Tyrol.  Prior to this, the Republic of Venetia were fighting to gain control of the region. 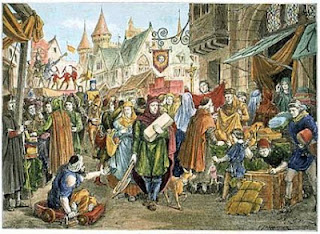 As Trento borders the Southern Alps, 15% of the land can be cultivated. Despite this, Trento became a thoroughfare for commerce between the Holy Roman Empire and the Italian peninsula.


The city’s heraldry depicts the Eagle of St. Wenceslas, black on a white background. Other depictions show small red flames about the Eagle, which could be a poor representation of a sun or an aura. Before ceding Trento to the House of Habsburg, blazons also depicted the red Eagle of Tyrol quartered with the black Eagle on similar background. The black Eagle is certainly Germanic and use of black, white and red as theme colours for the infantry will prove challenging. The mounted arm will have a variety of colour depicting the various famiglia, condottieri and feudal elmeti.