In the campaign system of DBA2.2 a player’s finance requirements were kept simple. Dependent on the number of cities one occupied determined if one could field a complete army, supplying it required an unbroken chain of cities connecting the army with its supply centre. Not overly complicated, but Western European history tells us a state could not sustain a large number of battles nor execute successive campaign seasons as it was financially ruinous. Going to war meant much preparation involving taxation, negotiating loans, making concessions and building alliances all of which could take years.

Below are a few relevant features of medieval banking one might consider to feature in a campaign. Of these, two significant features brought banking from the feudal period to the age of the Renaissance and these were international commerce and the Church’s prohibition of usury. 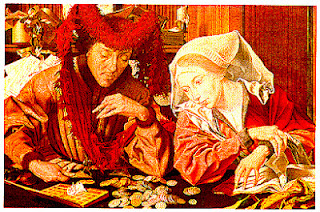 During the 13th and 14th century increased commercial activity between merchants stimulated a number of services banks could offer, such as holding and transferring large sums of money, granting of loans and investments. The latter attracted a number of Italian families to invest capital in commercial enterprises which were quickly followed by the ‘well situated’ in other countries, such as Spain and Germany. Kingdoms that could not raise sufficient taxes, were forced to take loans in order to go to war. For the lending house this did bring high risks as some bankers discovered when Edward III defaulted on his loans. Those houses that survived such ventures did so with by utilizing a large network of agents with an intimate knowledge of their respective regions.

The Church’s prohibition against charging of interest on loans or usury proved a major obstacle for the money lenders, deemed morally wrong, the 15th century financier found ways to circumvent the Church’s objection. Simply put, if an investor were to share in the profit and in the risk, then said transaction must be seen as a joint-venture. This did not pose an issue to the Church, but it opened further services which a bank could offer. Let us look at a few features of banking that set the foundation to many aspects of current financial transaction. 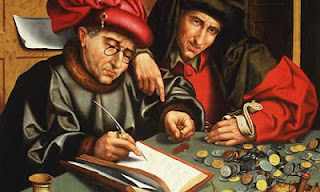 There origin can be traced back to the grain and cloth merchants of Northern Italy settling trades and holding deposits or notes (cheques). As bank and merchant were mutually forming a ‘joint venture’ this overcame the Church objection to usury. By the 14th century, trade diversified to include armour, paintings, jewellery, wine, lead and religious articles. One Francesco Datini of Prato, amassed a fortune and became a merchant banking in Florence adding offices in Pisa, Genoa, Barcelona, Valencia and Majorca with contacts in Bruges and London. Datini’s accomplishments proved in order to be a merchant bank a company had to have an international presence, in essence to operate in in at least two places, preferably more.

Italian merchant banking business were dominant until the late 15th century only to be surpassed by the German and Dutch banking families. Another problem for Italian business was the rise of the Ottomans forcing many trade routes through the Middle East to shift further north.

To overcome the diversity of coinage minted by each state, merchant banks had to set exchange rates in order to accept coinage from other lands. This could mean coinage could be over or undervalued leading to severe consequences for the money lender. With respect to the Holy Roman Empire, the most common coin is the thaler, florin and mark. It would take another century before the establishment of an Imperial Minting Ordnance which would set value to diverse silver and gold coinage used within the Empire.

Economic Crisis of the 15th century

During the Middle Ages, gold and silver coins served as the basic currency which facilitated trade between Europe, the Middle East and Asia. During the 15th century, the supply of precious metals had a devastating effect on European economies. Silver and copper coinage took care of basic transactions, unfortunately the accelerated demand far outstripped the mining output. The scarcity was also due to the outflow of coins as payment for product from the East. Gold was less affected by the crisis and retained its value, but it was less suitable for small transactions. Eventually, the scarcity of silver would spread from Europe to the Middle East, and would affect the Far East, including the Ming Dynasty.” 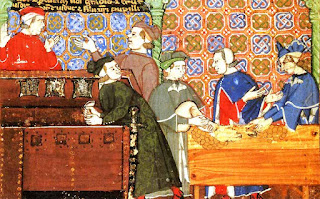 Possible application in a campaign system

How best to fit banking in a 15th century game is still up in the air, but my first thoughts are to have each entity (duchy, county, bishopric, free city) establish commercial ties throughout Europe. Capital is gained by keeping the commercial lines open each season and gains are held in the entity’s bank.

If the commercial lines are jeopardized this might generate a conflict requiring a resolution by armed force. As the game will focus on the lands of Northern German and Scandinavia other circumstances may disrupt the flow, such as competition, piracy, revolts or bankruptcy.

In 15th Western Europe we see realms taking on their familiar form, such as France, Denmark, Norway and Sweden yet we find many duchies with holdings scattered throughout the continent. The house of Wittelsbach (Duchy of Bavaria) held sway over Hainaut, Holland, Zeeland and Friesland and the Burgundian realm stretched from Switzerland to the North Sea.

In the topic of Towns and Cities we noted the rise of the urban elite supplanting influences long held by the noble houses. This could develop into rivalry possibly weakening a state’s response to external threats. Historically, unions or marriages were done to solve such problems. For the shrewd player this would mean acquisition of territory without the use of force.