The peasants, for our campaign purpose, are deployed for scenarios involving civil unrest among the Barons, raids and whatever else I can think of. These were bought a month ago, with my last purchase of Legio Heroica. Now that all six are complete, I wanted to add these to the army list.


Photo one, was taken yesterday. The figures lacked detailing and highlight and on the whole I was pleased with the colour combinations. I have done lots of peasants for 10th and 11 century medieval armies and was for the most part clothed in unbleached linen or wool of natural colour. 14th and 15th century illuminations show farmers with a greater range of colour, perhaps artistic license, but we do see red, blue and green dominate. Using these three colours, I worked with lighter shades to increase variety among the horde. 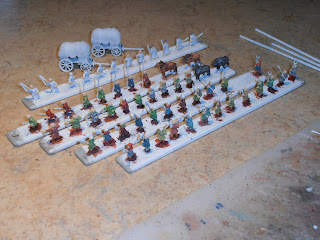 The monks are Essex and will be based among the horde. While researching the different orders, I decided to have some novices (grey) and the rest as Benedictine monks (brown). I did work with shades to render an impression of new and faded clothing.


Photo two, was taken prior to lunch. Figures are done and will be varnished shortly. The two wagons from Essex. I will order more equipment and wagons, but will place this on Museum Miniatures. They have female peasants armed with improvised weapons and a good selection of barrels and boxes. All together, these will look nice as camps for either army. Extra peasants will be based as camp followers as per DBA. 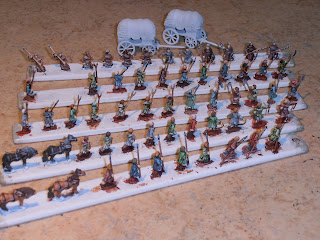 Next week, the Agora blog shall have a face-lift. This shall remain my central point for selling DBA and HOTT armies, but will also host the new medieval campaign series – “Game of Thrones, German style.” (Working title)


Starting another blog specifically for the campaign did not appeal to me as I wanted to limit the number to this one and the 18th Century Sojourn.

Cheers,
Posted by Timurilank at 06:56