Using the same field as game one, the deployment area moved clockwise a quarter turn. Both Bavaria and Austria had terrain to anchor a flank while the open side was covered by the knights of both sides. The deployment of the infantry remained unchanged with the artillery taking a flanking position to support their respective infantry line. 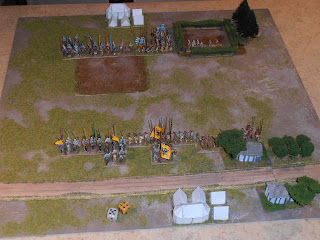 The Bavarian nobles deployed across the ploughland risking an inconvenience; if the ground proved worse than expected, at least mounted and foot would “move as a wall”.


This game, the Bavarians had opening move and the ground proved good going (yodeling could be heard in the back ranks).


Photo two shows the positions after bound the second bound. The Bavarian nobles attempt to turn the Austrian left, while the infantry group would plod forward . The crossbow and Handgunners moved out of the enclosure to extend the battle line. 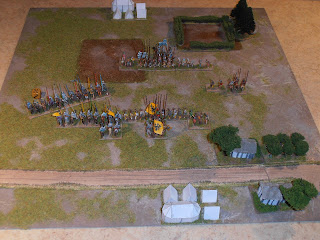 The Austrians were able to push their infantry forward leaving the artillery a clear shot at the hand gunners. The Austrian knights closed to combat and for the most part were able to  push the Bavarians back. In Photo Three, the Austrian gunners congratulate themselves by sending the Handgunners home. 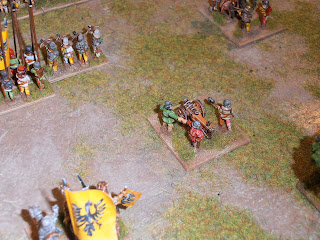 For the next three bounds, Fortuna smiled on the Bavarians. The artillery managed to destroy an element of knights, crossbows stopped dead the Coustilliers of Austria and the following bound Austrian crossbowmen fell to a pike assault. 3-0 for Bavaria. 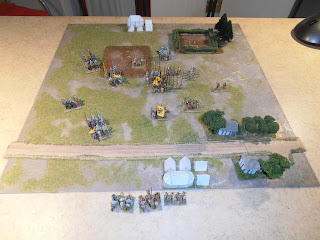 During this time, the pike blocks were evenly matched, while the knights of both sides showed the latest dance steps; one forward, one back.


With a six for pips, the Bavarians smelled victory and moved as many units to join battle or seal of escape routes. An Austrian knight sent back double their number of mounted troops, while after a valiant effort, the Bavarian pike block fell bringing interim score 3-2. The last melee for the bound found the Austrian artillery skewered by a sole Bavarian pike. End game 4-2. 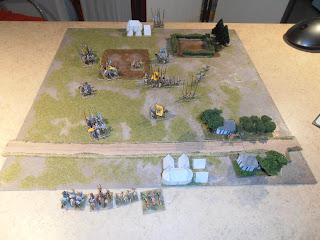 
Both games were fought on the standard 60x60cm game board. With the increased movement, the smaller playing surface did not seem to hamper play at all. If anything, it prompted the use of reserves.


Artillery are present in most Late Medieval armies, but as an option in place of an element of Ps. I am still debating over its usefulness with respect to an element of “fast” troops. The Bavarians were extremely lucky destroying an element of knights, but is it realistic to expect that every game?


An infantry battle line with a mix of pike, blade and crossbow is very effective at sealing off parts of the battlefield. A flank comprising solely of knights will after two bounds open a lot of opportunity for “reserve” units.


This game, the crossbows avoided the misstep of the last game; by moving only 1BW to shoot that bound.


The coming week I shall dedicate to refurbishing hills (gentle and steep) and woods, so further testing will be played with them. Austrians versus Swiss and Late Hungarians.
Cheers,
Posted by Timurilank at 23:51