The Hammadid meet the Almoravid

The breakup of the Caliphate of Cordoba in the early 11th centuryb had local governors forming independent entities, that would be known as Taifas. Their number would nearly reach thirty, but many smaller realms would later bend the knee to the eventual eleven strongest on the Iberian peninsula. Taifa independence did not last long as Al Andalus would become later unified under Almoravid rule. Across the strait in North Africa, the Taifa of Cueta, would be the first to encounter the rising power of the Almoravid.

The year is 1062, governor of Ceuta, Buluggin ibn Muhammad, assembled an army to meet Yusuf ibn Tashufinin and his Almoravid host near the hilly region to the east of Fes. The North African Muslim list is to be used for the Army of Ceuta and the Islamic Berber for the Almoravid replacing the Tuareg camel rider for Ghuzz horse archers.

A thin line, bristling with spears, formed the army of Cueta. In support, the majority of cavalry formed its second line with difficult hills protecting both flanks. Facing them, the Almoravid line stretched beyond the Ceutan line, clearly intent on a flanking manoeuvre. 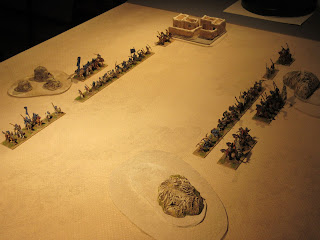 Both infantry lines clashed, giving little ground, and on the Almoravid right, light cavalry probed the Ceutan left for any weaknesses. 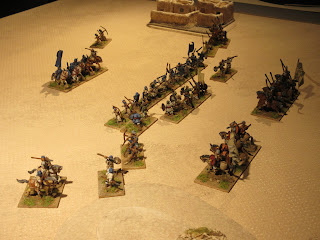 An over zealous Arab cavalry where caught and put to flight, exposing the entire Ceutan left wing, giving the Arab general no option but to leave the field. Almoravid victory, 4 – 3.

Both armies mirrored the other’s deployment, even positioning light horse on the right flank to flank the enemy’s line. 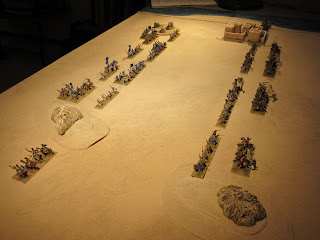 The Ceutan army opened the battle with an advance in right echelon bringing the Arab spearmen to make first contact. Adding the the clash of spear point on shield, Ceutan light cavalry attacked the Almoravid left from the shoreline. The Arab left now joined the battle, bringing both sides in a general slugging match. The pushing and shoving generated a few casualties, but both lines remained unbroken after an hour of fighting (4 turns). 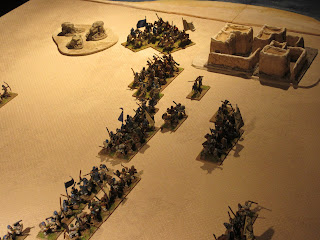 Desperate to reach a decision, the Ceutan commander sent his uncommitted light troops to seize the hill on the Almoravid right. From their new position, they could harass the enemy rear from aiding the battle. 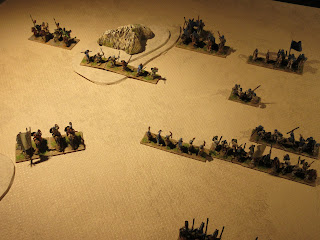 Unfortunately, the order to move forward came too late as exhausting overcame the Ceutan army as both flanks collapsed exposing the army to a potential encirclement. A general retreat was called, giving the Almoravid a second victory, 9 – 5. 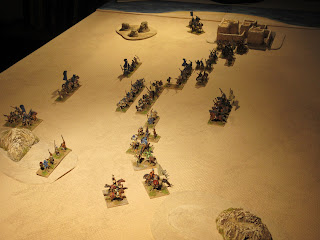