Wood
Tropical forest regions do not consist solely of palm trees, but in this case I did want my tropical board to look distinct. These plastic palm trees are ‘cake decorations’ manufactured in China. Placing two pieces per base, these were glued and covered with Milliput and later textured with a coating of white glue and sand. Earlier models had other plastic vegetation fixed to a much larger base but lacking adequate storage these quickly became broken and disused. 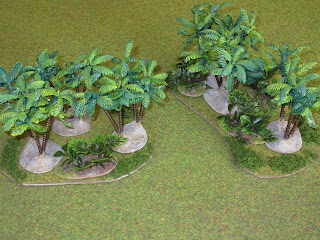 Extra foliage is based separately can be placed about the wood’s template as scatter material to be removed during play. This has the added benefit of being placed elsewhere on the table; as scrub or villages.

River
Extra foliage can be scattered along the banks of a river which would make for some interesting photos.

River with foliage placed along banks. 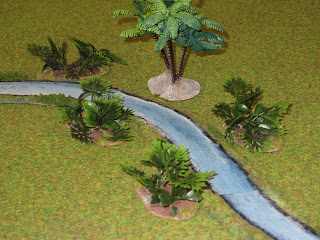 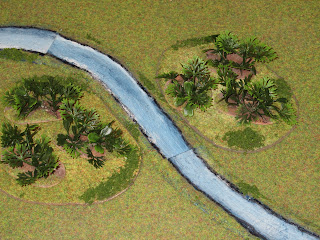 Gully
This piece was originally made for steppe terrain, but with the addition of scatter material fits in well with my tropical terrain.

Gully with foliage placed along lip. 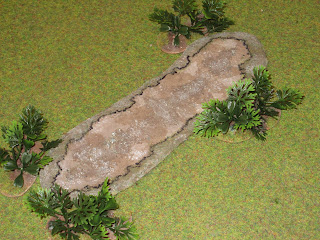 BUA
I had planned an edifice and hamlet for my tropical board. The Hindu temple picture that would serve for my edifice and the hamlet would have structures made to represent bamboo huts with thatched roofs. When completed, this page will be updated and photos added. 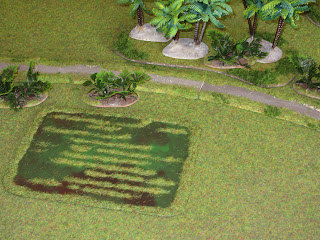 The rice paddy is made from a clear sheet of acetate (1mm thick) with its underside painted brown and green in a mottled fashion. The edges of the upper surface are covered with white glue and covered with electrostatic grass.
Road
Roads and  its construction have been covered here.

Next: Littoral
Posted by Timurilank at 00:25