Waterway
This is one terrain feature that has made several transformations before reaching its final form as seen in the photos. The first model was one piece produced for DBA 2.2 which measured 24” or 60 cm in length.

With the release of DBA 3.0, the waterway grew with the increase size of board (80 cm). The longer piece had its bank covered by grass, in some places adding an extra 2BW. Unfortunately, the grass extensions curled which required constant bending to lie flat. 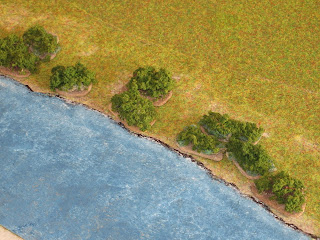 The final waterway is 4BW wide and consists of two 40 cm sections. Grass areas are now replaced by dune or beach areas which can have scatter material (long grass) placed on them.  Covering the beach areas with scrub and trees, the waterway can represent major river, such as, the Rhine or Danube. Its construction can be read here.

Either difficult hill or marsh, either wood or dune
The number of littoral armies has increased over the year and all come from diverse climate regions; the Early Germans of the Rhine, Carthaginians, Early Muslim North Africa and the Zanj of Southern Iraq. 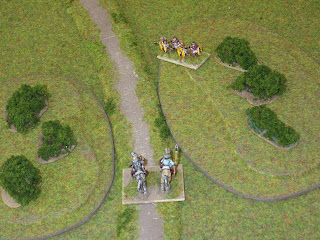 Wood and marsh.
Selecting terrain features for use with a particular army should be done with a bit of logic. The marshlands of Southern Iraq would make use of marsh and dune than difficult hill and wood. Conversely, Early Germans would be at home with a waterway with a number of difficult hill or wood on its game board and difficult hill and dune for North Africa.

BUA
At the moment I have a number of architectural styles that make up a hamlet; these are Roman style buildings, Arab dwellings or thatched roof huts. From a game perspective, there is a preference for hamlets as these are ‘rough going’ features; a haven for ‘fast’ troop types. As game experience increases other BUA types, such as a city or edifice, may find a place on the game board. 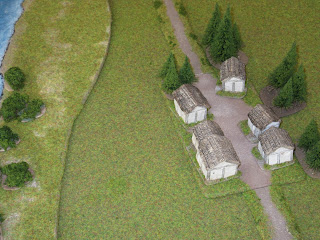 Road and River
The construction of these has been covered in detail under 'arable'. On a side note, rivers have not been used with a waterway for the standard game as this would greatly slow the game down; having said that, the Battle of Issus (333 BC) was fought over such a field. This might be better played as a BBDBA option.

Next: Scatter Material
Posted by Timurilank at 00:24