This test campaign is set in the late 3rd century AD and the Black Sea Kingdom of Bosporus is defending its territory against a “Scythian” (Alani) incursion. The Tanais River is the northern frontier of the kingdom and the site of the first engagement between these two armies. An alternative route to the Bosporan capital of Panticapaeum as rival tribes and Sarmatians would provoke an unplanned conflict for the Alani. 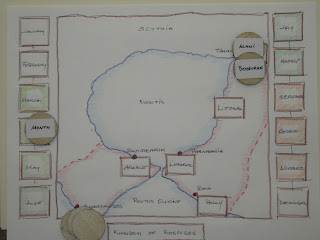 The Alani tribal leaders are planning a spring offensive to defeat the Bosporan and capture the capital of Pantipaceaum. With much coercing and lofty promises an army slowly assembles at the Tanais River in April. Crossing the frontier they met the Bosporan army deployed for battle. The action was brief as the Alani nobles made very little impression on the Bosporan armoured cavalry but the massive destruction meted out by Bosporan archers did not go unnoticed. The Alani warlord called off the engagement and moved back across the frontier. (Score 4 – 2 for the Bosporan). 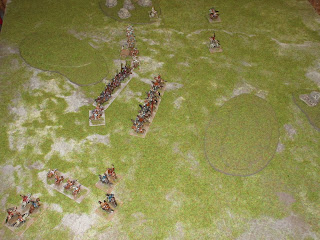 Displeased at the defeat, rival chieftains argued while others threatened to leave the campaign, but a new leader was found. By July, the Alani horde re-crossed the frontier to meet the Bosporan.

Using their superior mobility the main battle line would slowly advance giving a flanking column time to encircle the Bosporan open flank. A well time charge caught the Bosporan infantry at a disadvantage; their heavy loss prompted the Bosporan Strategos to call a retreat.  (Score 2 – 5 for the Alani). 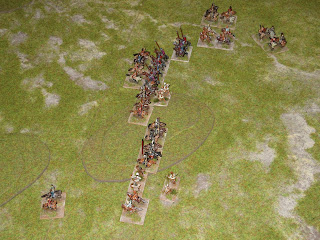 Retreating along the shore of the Meotis Sea, the Bosporan army gathered its fugitives and called up reserves from Panagaria. The Alani also took advantage of a brief respite to gather new warriors to the horde as the horde finally approached the Bosporan in August. 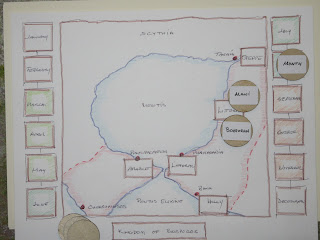 In the early morning, from the Bosporan position, one could see the main strength of the Alani was deployed near the shoreline placing all the Bosporan infantry effectively outside the battlefield. The Alani wasted no time and launched an aggressive attack outnumbering the Bosporan cavalry two to one. The effect of the charge shattered the Bosporan army cutting down most of the armoured cavalry and light horse. (Score 0 – 5 for the Alani). 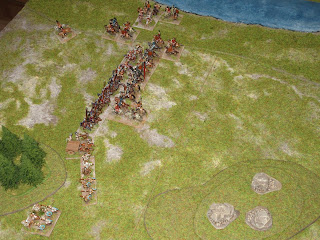 News of the defeat set Pantipaceaum into a wave of panic. The Bosporan military council would make a last ditch effort at Panagaria and ferried their last reserves over to support this and even the Sarmatian promised an allied contingent to gather at Panagaria to help repel the invaders.

For unexplained reasons, the Alani horde did not arrive until October presumably they were too busy plundering the countryside of Meotis (lacking points, the Alani could not move). 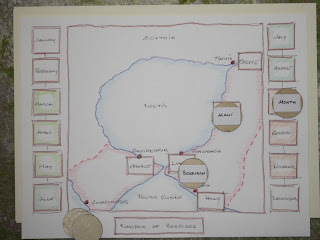 Outside Panagaria, the Bosporan army deployed in a compact formation with the Sarmatians positioned near the shoreline, next to them the Bosporan armoured cavalry supported by light horse and lastly the remaining infantry on the right. The Bosporan opened the battle with both sides quickly becoming embroiled in a desperate and fierce contest. As quick as it began, both sides slowly drew back to reassess the situation as both commanders were struck down. Dumbfounded, the Alani withdrew first and with November approaching would cross the frontier to return home. (Score 4(G) – 3(G) for the Bosporan). 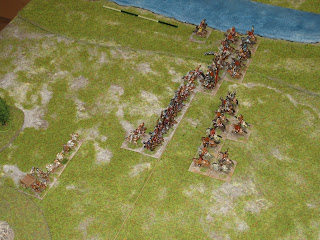 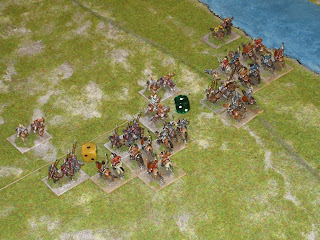 
An Assessment.
I was very pleased with the results of the campaign and especially the outcome of the final battle. The situation for the Bosporan looked very grim following her second defeat yet Aphrodite smiled to ensure the Alani had no points to care for supply or the replacement of troops; this not an issue for the Bosporan as their war chest was deep enough to replace losses and secure allies for their final contest.

Playing the campaign system did not appreciably add extra time as each campaign month required two quick card games to determine who gained points. What made the games interesting subsequent battles were fought with uneven number of elements. Each side could replace up to three elements lost for the cost of one point which meant the Bosporan was still short two elements in one case. The shortfall was solved for the last battle by hiring the Sarmatian allies for the cost of an extra point.

The revision also satisfied the requirement of multiple phases (original set) for each campaign month with only one step thereby decreasing the amount of time needed for the campaign move. Having sufficient points meant a player could readily replace losses, hire allies and make strategic moves and lacking them your army became immobile as did occur on several occasions to the Alani.

Revising the rules set shaved down the number of pages from five to two, this no doubt may change with further play tests. This will continue as I search for some interesting and lesser known historical themes.


By the end of October a final copy should be uploaded to the Fanaticus DBA Wiki for others to use.
Posted by Timurilank at 00:30