Project Rome - a battle against the Iberians.

In late March, allied scouts brought word of an Iberian column advancing toward the proconsul’s column and should arrive the following day. While the legions set up camp, the proconsul and his escort would scout the area for suitable ground to fight on. The spot chosen offered a deserted village flanked by woods and hills, though not dominant enough to discourage the Spanish from attacking, but of sufficient size to protection for at least one flank. 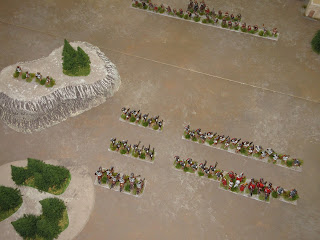 Somewhat surprised at the small number of Iberians approaching the proconsul’s first thought was to look about for a hidden force lurking about, but that idea was dispelled as there were no terrain features that could hide such a force. 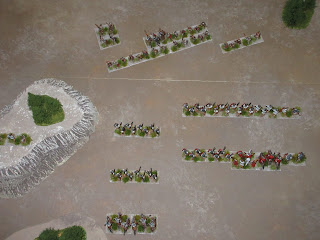 Rome moves forward in echelon leading with her right wing.  The Iberians on their bound begin wheeling their groups to the right and will meet the legion head on.. 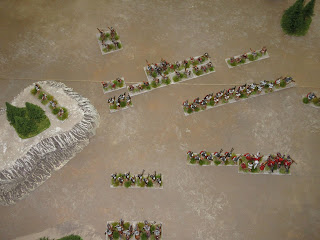 Turn two, Rome wheels her right wing to meet the Iberians. Skirmishers from the second line are sent forward to eventually flank the Iberians. Meanwhile, the Iberians move forward and contact the allied legion taking first casualties, 1 – 0 for Iberia. 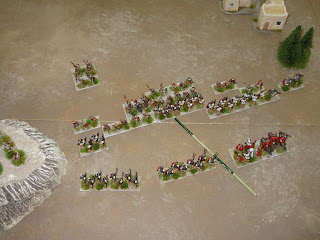 Turn three, Rome brings her right wing into combat and the measuring stick shows the result of Iberian Ps recoiling through friends luring the Roman Bd forward. Iberia gained another small victory destroying Roman velites on the left flank, but lost one Ax to Roman blade. Score 2 – 1 for Iberia.. 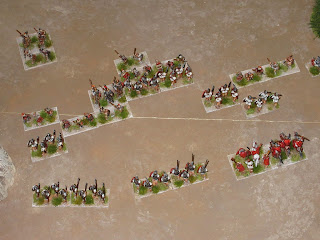 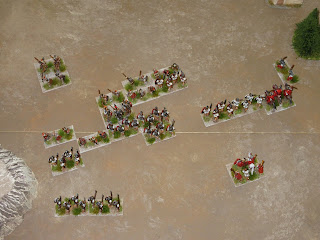 Turn four saw Roman reserves from the second line brought forward to add pressure to the Iberian centre and on the right flank brought victory within sight as two elements were destroyed, 2 – 3 for Rome. 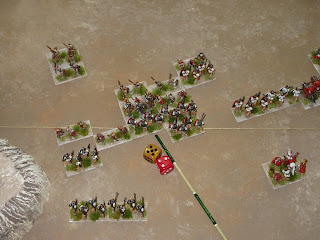 Iberia encouraged with her general fighting in the front, brought forward troops to support the centre. The Iberian general and devotio savaged the Romans in front bringing the score to 3 – 3 even. 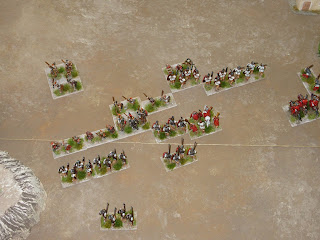 Turn five, not wishing to be upstaged by such a display, the proconsul joined the fighting in the centre and brought forward the right wing to add pressure on the Iberian. This last move sent the Iberians back on the heels and with the proconsul’s help, the Iberians broke. Victoria 3 – 4 for Rome.


Despite the victory, the proconsul could not afford to lose Roman citizens so early in the campaign season. The losses incurred by the allied legions could be filled with mercenaries from the friendly tribes, but not the Roman. This thought had cast a dark shadow over the day’s victory.