Following the end of the second Punic War, Rome began consolidating its foothold in a number of foreign territories and in particular Hispania. The two military theatres in Hispania continued their day to day operation and in 197 BC the Senate found it expedient to have them become administrative provinces, each governed by a proconsul. Hispalus would serve as the seat of government for Ulterior Hispania and Tarraco for Citerior Hispania.

Our test scenario opens in the year 197 BC and proconsul and propraetor for each province have been given their assignments. The consular army for each province is at full strength, two Roman Legions and two allied legions bringing the combined total to 36 elements.

For this test scenario, each proconsul will serve a term in which he is free to conduct military operations within the parameters set by the Senate and these are the consolidation of territories formerly held by Carthage. Carthage once controlled nearly half the peninsula and this year’s objective is to extend the current frontier two or three map squares. Each consular army has been split into two equal halves making four columns that may independently operate for the campaign year. All forces must return to winter quarters by November. After which new lots will be cast for the coming year and troops whose contracts have expired shall return to Italy. May Fortuna smile on your enterprise.

Photo one shows the disposition of the four columns and photo two their initial move into the interior. 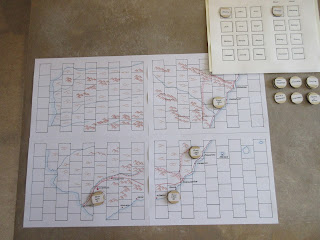 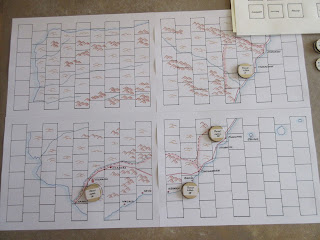 In photo three, the cards dealt for the Roman player are displayed. The proconsul of Citerior Hispania has the option to play the diplomacy phase and does wishing to create a “Friend of Rome” (shown in photo four). The negotiation falls on deaf ears as the local tribal leader kindly says no thank you (photo five).
Cards are discarded and new ones drawn for the next phase. 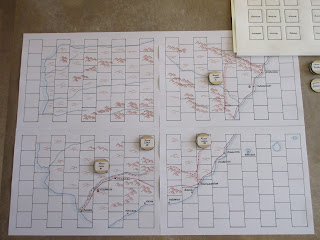 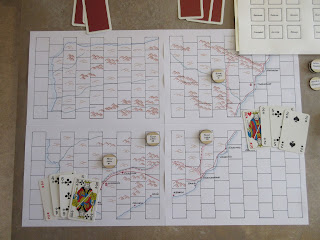 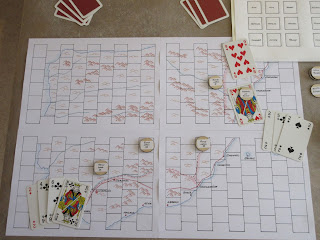 Miffed,  Rome attempts to gather revenue in a nearby region but is not successful, in fact Citerior Hispania has lost by suspicious means revenue as the Spanish player successfully counters the Roman bid (photo six).
A counter is placed in the province to signify its loss. 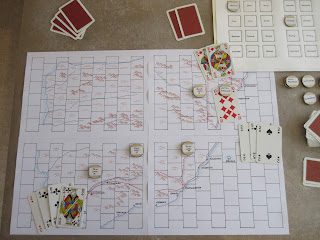 In phase three, as each column is well supplied, both Roman players will pass this phase but discard one low value card and replace it with a new card as seen in photo seven. 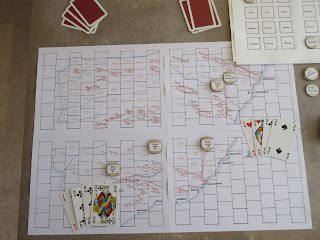 The last phase also does not offer any possible bid, therefore both Roman players discard one more card and draw a new one.

Spain has no armies in the field at the moment so her strategy at this time is to undermine any gains produced by Rome or impede army movement by sabotaging her supply. Photo nine display the cards for the Spanish player. 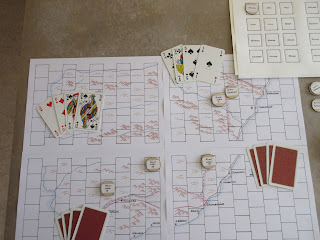 With nothing to lose, Spain will raise rebellion in the area of Baetica (southern Hispania) to impede the Proconsul’s column. In photo ten, the Roman player cannot counter with the proper suite and now confronts its first hostile tribe. 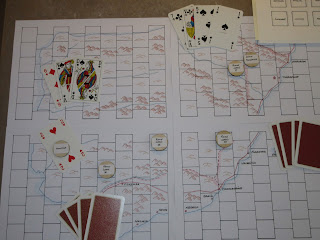 Spain attempts some skulduggery to inflict lost revenue for Rome, embezzlement was a favourite pastime back then (photo eleven). Rome losses the bid and a counter is placed on the map to be covered by an embarrassed Roman player’s cards. 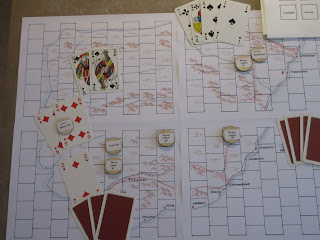 In the third phase, both Spanish players hope to inflict damage on Rome’s supply and this is successfully done in the Ebro valley (photo twelve). The Roman player in the south is happy to have saved his supply column as he now faces a hostile tribe. 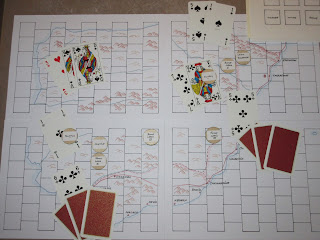 Spain is intent on giving battle against the Roman column in the south and will attempt to use a stratagem. Unfortunately, the attempt is foiled (photo thirteen) but the Spanish will meet Rome in the field. 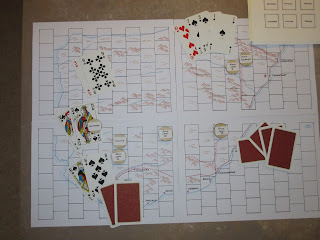