Pepin of Herstal, Mayor of the Palace of Austrasia, united the Frankish realms of Neustria and Burgundy in 687 and subjugated the Alemanni, Frisians and Franconians firmly setting the Pippinid family as the strongest in Francia. His death, in December 714, signalled an open conflict between his heirs and the Neustrian nobles seeking independence from Austrasian control.

Dagobert III remained the Merovingian king of the Franks, but real power lay with the Mayor of the Palace and before Pepin’s death, Plectrude, his wife, had him disinherit his sons by his mistress Alpaida and appoint Theudoald as his successor. Friction soon escalated when Dagobert III named Ragenfrid as Mayor of the Palace, essentially declaring Neustrian independence and setting the stage for a civil war.

The Neustrian army went up to meet Theudoald on September 26, 715 at Compiègne, in Neustria, in the forest of Cuise located between Saint Jean de Cuise and Cuise-la-Motte. The battle was brisk and a defeated Theudoald fled to his grandmother Plectrude in Cologne.

Not wishing to remain idle, Plectrude, the widow of Pepin of Herstal, gathers the support of Austrasian partisans to name her grandson the true mayor, and to ensure her choice she imprisons Charles Martel, son of Alpaida, in Cologne. Escaping from prison, Charles is supported by Austrasian magnates generating the war between three parties.

Recovering from the setback at Cologne, Charles regrouped his forces to pursue and reach the Neustrians near Malmedy. The Battle of Amblève was a turning point for Charles as his reputation not only grew, but he had regained his father’s wealth.

In joining Chilperic II and Raganfrid, Radbod of Frisia seized the moment to sack Utrecht, burning churches and killing missionaries. This aggressive act brought Charles the needed support of Willibrord and his monks, improving Charles’s standing while gathering troops for his army. During the period of training, Charles sent envoys with a proposal to end hostilities on the condition his rights as mayor of Austrasia were recognised by Chilperic II. The refusal was not unexpected and preparations continued for a spring campaign.

The Battle of Vincy, near Cambrai, was a major victory for Charles Martel, who pursued Chilperic II and Raganfrid to Paris. However, not prepared to hold the city, Charles returned to Cologne to deal with Plectrude. In taking the city and dispersing her adherents, Charles allowed Plectrude to retire to a convent.

Able to consolidate his power, Charles proclaimed Chlothar IV king of Austrasia in opposition to Chilperic II. The political climate reached a boiling point as Chilperic would make an alliance with Odo (Eudes), the duke of Aquitaine, expanding the conflict further to include southern Francia. But that is another story.

The Battles of Compiègne, Cologne, Amblève and Vincy form an ideal basis for a campaign and several options will be tested, results will appear here later. In the meantime, researching the individual battles continues and the first two have produce some interesting results. 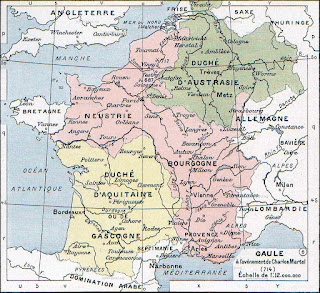 map: Francia at the death of Pepin of Herstal. (Wiki common)