Since 2020, the viral spread coupled with Brexit have curtailed the purchase of new figures. In its place, time was spent revitalising the collection, either by refurbishing painted figures or consolidating smaller collections to create larger and different armies.

In the vanguard of the great project were the Muslim armies, regrouped from ten small armies to five larger ones (see link). Additional armies were cobbled from Colonial Sudanese figures to build an Andalusian, Zanj, Tuareg and Islamic Berber.

Next in the queue came the late medieval collection, taking the remainder of the year to complete. The effort paid dividends as the ancient and medieval armies were better organised offering a view of what was lacking.

This brings me to a position where I can order new armies. Not wishing the hassle of VAT, customs tariff and high postage costs, I have decided to look to manufacturers within the EU.

The Carolingian Franks are my first purchase from Baueda of Italy. I am very pleased with the quality of casting as the figures require little cleaning. As a former horse owner, I am very pleased with the poses and proportions of all the mounts. The two DBA3 army packs were ordered, one pack is painted, bases need finishing and the second pack is well on its way. This should take another week to complete and plans are being made for their first campaign.

First pack ready for base texturing. 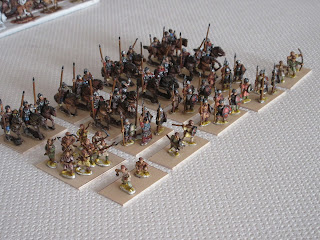 Second pack, on their plinths to be painted. 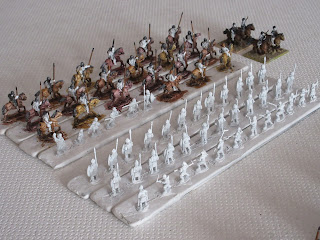 The two army packs of Carolingian Franks are painted, based and flocked. Four banners will be painted tomorrow to polish off the collection. With extra figures supplied in the army packs, I ended with more than the 14 element advertised. Four mounted Frankish archers were mounted on Essex horses giving each army an extra mounted element. Very pleased with the results. 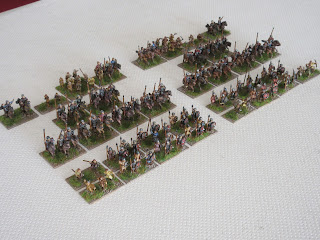 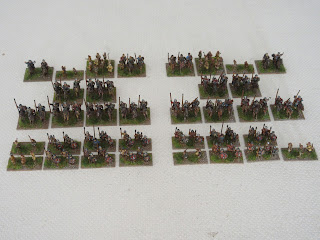 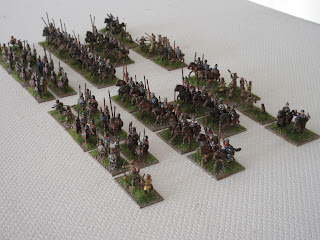