The Umayyad, encamped south of the Zab River, deployed its force into two wings of equal strength. The long line of spearmen was flanked by archers and small units of heavy cavalry protected their flanks. The remaining mounted units formed a reserve behind each of the infantry wings.

The Abbasid, as the attacker, positioned all their infantry to face the Umayyad left wing and held a large cavalry group to face the Umayyad right. Both commands were of equal strength with one exception, all the light horse were deployed on the right wing. 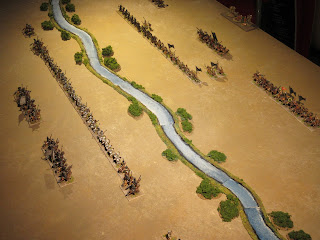 The opening moves.
The infantry lines of both sides moved forward and took up positions on either side of the river. The resulting sporadic archery had little effect but did offer both sides a moments respite to consider some new options. On the extreme right flank, the crossing of the river by the Abbasid light horse was contested by Umayyad light horse and Jund cavalry. 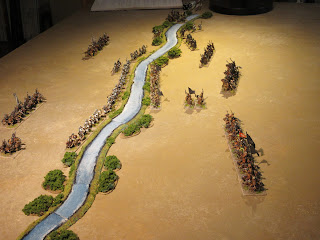 By good fortune, the Umayyad light horse had been beaten offering the Abbasid an opportunity to counter which they did with good effect (2 – 0). 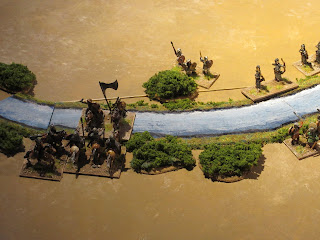 Despite the setback, the commander of the left wing held the river bank with his spearmen and re positioned his remaining infantry in echelon and Jund cavalry still further back. This offered the Abbasid an unopposed crossing but it was no means a coordinated one; this opened a possible opportunity. 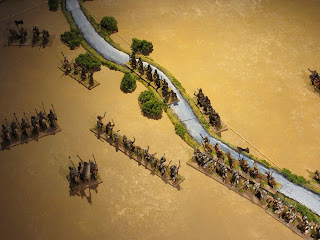 The middle game.
That opportunity presented itself on turn five when the Umayyad struck a small group of infantry with their Jund cavalry. The success of having eliminated one infantry unit was offset by the loss of their own bringing the score to a desperate 3 – 1.

The Abbasid infantry of the left wing were now engaged with the Umayyad on the opposite bank. 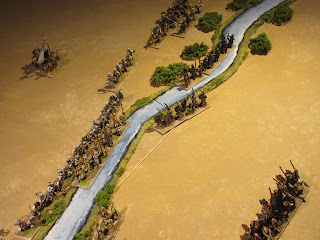 After two hours of battle (turn 8) the Umayyad left became demoralised as another unit of Jund fell to Abbasid javelins but the effort had cost the Abbasid dear (4 – 2).

On the Umayyad right, the infantry were holding the river line sending every Abbasid recoiling back for their effort. 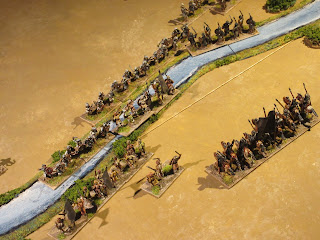 With the infantry of the Umayyad right hotly engaged, the Jund cavalry, five units strong, reached the bank of the Zab intent on forcing the battle to a conclusion. On the left flank, the slaughter continued as Abbasid caught isolated units, yet the spearmen of the left wing held their position at the river bank with their general directly behind them. 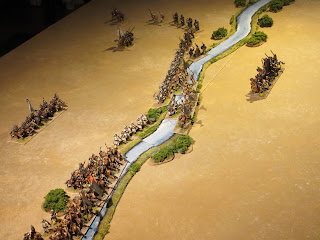 After two and a half hours of battle (turn 10), the Abbasid archers demonstrated how well their condition had not slackened one bit. 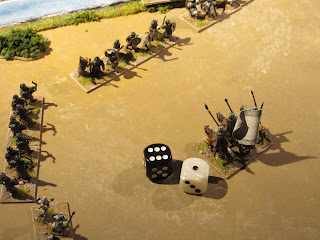 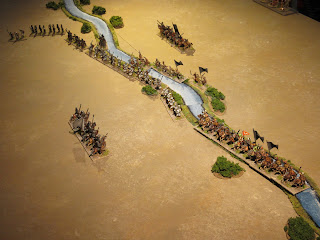 Each command consists of 12 elements, therefore four casualties are needed for a command to reach demoralisation. Umayyad commands are identical while the Abbasid have redeployed their light horse and Zanj infantry.

Optional scenarios.
The historical strengths for both sides varied great, but most set the Abbasid force at around 35,000 troops with the Umayyad fielding two or three times that number. Despite the odds, the Abbasid had a string of victories the previous year and were eager for battle, more so as their leader, Abdallah ibn Ali had been proclaimed the rightful Caliph.

In contrast, the frequency of rebellion over the past four years had eroded the confidence the troops had with Marwan II’s capacity to lead; this was demonstrated by the reluctance of some units to obey orders during battle.

There are a few ways to reflect this in the game, one, by increasing the number of Umayyad troops and/or two, adjusting the total needed to demoralize an Umayyad command.

Option 1, the Abbasid retain their two commands totaling 24 elements while the Umayyad are increased to 36 elements but still form two commands. This would prompt an Umayyad player to maintain larger groups or maneuver part of a command while the rest remained inert which would demonstrate to a degree a level of disunity within the command.

Option 2, the 36 elements are distributed among three commands and not two. The total needed to reach demoralisation however, should be lowered by one for the two commands subordinate to Marwan II. Both sides must demoralise two commands to reach victory and despite the Umayyad having a superiority of numbers, their confidence can be shaken when the casualties mount.
Posted by Timurilank at 00:04