Following the Persian defeat at the Battle of Dara (530 AD), King Kavadh I continued his campaign the following spring by sending another force to probe deeper into Byzantine territory (Commagene) with intent to capture a number of Syrian cities. This force, led by Azarethes, consisted of 15,000 cavalry had an additional 5,000 Lakhmid allies. Trailing the Persian force, Belisarius had insufficient troops to bring Azarethes to battle, but reinforcements arrived on Easter Friday giving Belisarius a slight advantage in numbers. 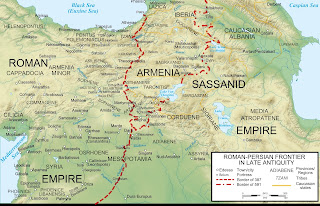 Having defeated the Persians on two occasions, Byzantine commanders were naturally eager for battle, but rather than risk battle, Belisarius preferred to drive the Persians back across the frontier. Further, the Easter weekend would be an inauspicious moment to fight as many troops would be fasting. The general consensus wanted battle, so relenting, Belisarius drew up his forces the following day.

The battlefield.
The battle is described as having taken place on the south bank of the Euphrates River and for the most part this offered level ground for half the battlefield rising gently for the remainder of the field. No further description of the terrain is given, but gathering from the disposition of the Byzantine infantry we might conclude there was suitable cover for infantry to operate against cavalry.

The game board.
1 x Waterway (Euphrates River), 3 x rocky ground, and rising ground stretching across the depth of the board (starting 12BW from the board edge and gradually rising every 4BW).

Byzantine infantry on the left secured the south bank of the Euphrates and on the right, the Lycaonian infantry formed on the rising ground with all the Byzantine cavalry positioned in centre. The Ghassanid Arabs under Al-Harith were deployed further up on the rising slope.

Sources describe the Sassanid as an all cavalry force, so an adjustment to the DBA Sassanid Persian list II/69c should be made for this battle. No elephants, levy or Dailami are mentioned as being present, so Asavaran cavalry and vassal horse archers are substituted for these. The Persian Azarethes placed the Lakhmid Arabs under Al-Mundhir to face the Ghassanid and the Sassanid Asavaran faced the Byzantine troops.

Note:
Both Arab allies are described as mounted and for this re-fight we may conclude that those foot troops present have left their mounts (mules, camels) to the rear of their deployment.