For those readers who have chimed in late, over the past year and a half I have been developing various models of campaign rules for use with DBA 3.0. Some featured flexible time periods, some offered stratagems for use before battle and recently I experimented with unequal size forces. This now brings me to my latest experiment; insubordinate commanders.

Recalling the Italian campaign of Belisarius, the Byzantine general had frequent clashes with subordinate commanders; Ian Hughes covers this well in his biography of ‘Belisarius, the Last Roman General’. The situation is not unique as history records ample examples of insubordination and you will find examples in books I, II and III of Frontinius’ Stratagems.

For campaign purposes, one can imagine an insubordinate commander disrupting carefully laid plans until his superiors deem his removal a wise step, however, during battle the presence of such behaviour can have disastrous results.

In a previous experiment with uneven sides, I demonstrated how a smaller force could have a reasonable chance of success against an army with superior numbers and if designing scenarios based on historical encounters you will find many such examples.

Take the Battle of Manzikert (1071) as an example. Andronikos Doukas was at odds with Romanos IV and during a pivotal point in the battle either ignored orders and marched off the field.

To duplicate this example, the Byzantines should have roughly double the number of elements to that the Seljuk, say 18 Byzantine elements vs. 9 or 10 for the Seljuk. Using the previous experiment with uneven sides, divide the Byzantine force into three groups with Doukas having a nominal command over one group. Both sides use one die for their pip score, but any elements under the command of Doukas would require an extra pip to make a tactical move.

Here is a situation similar to a command losing its general early in the game and to make and tactical moves this would require an extra pip. In our example of Manzikert, the insubordinate Doukas and his group are literally ‘lost’ for Romanos IV and therefore require the extra pip cost to move.

Each group in the Byzantine army would reach 'demoralisation' and flee the battlefield if it losses two elements. With a high pip score, Romanos IV may elect to hold Doukas in position. If the Byzantine player elects not to do so, then Doukas flees first followed by the rest of his group.

It is not known if the Seljuk commander was aware of the friction among the Byzantine commanders, the identity of the insubordinate group should remain unknown to the Seljuk player. 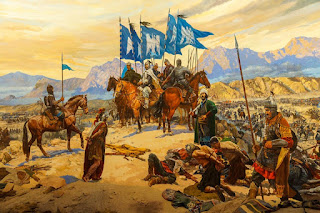 Illustration: Aftermath of the Battle of Manzikert. Diorama at the Istanbul Military Museum.

In the coming weeks this feature will be tested with different armies and those results will be posted here.

Cheers,
Posted by Timurilank at 00:27