Returning to the Migration to Kingdom project I had planned to continue the barbarian invasion as it unfolded in Hispania (409 AD). Unfortunately, I had struck an impasse as the campaign rules, as written, would not adapt well to the arrival of the barbarians and two decades later, the departure of the Vandals for Africa. As fate would have it the solution came elsewhere, the barbarian incursions of Roman Britain.

The situation in Roman Britain was very much different. The Roman general Constantine usurps the throne and departs Britain to deal with the barbarian invasion of the Gallic provinces. Leaving only the garrisons behind he takes with him the field army to arrive in Northern Gaul in the spring of 407 AD.  It is not clear if Constantine had appointed a replacement or if local officials selected their own candidate, what does follow after his departure are an increased number of incursions by the Picts, Scots and Saxons.

As written, the campaign rules now needed to track the long period of invasions (decades) by a greater number of barbarians confronting the Romano-Briton, the Picts from the north, the Scots-Irish from the west and the Saxons from the south-east. The time frame per turn therefore must change from its current monthly interval to possibly years. After further consideration, the time frame between invasions should occur at random intervals, but this begs the question by how many years?

Next, we have the problem of which of the barbarian invade first? A simple casting of the die could resolve this. Also to consider, the Romano-Briton as defender would have ‘arable’  as home terrain, yet we find other geographical areas that would certainly qualify giving the defender the additional choice of hilly, forest, or littoral; some certainly preferable if fighting at under strength.

I enjoy the simplicity of the  DBA system as with the cast of one die you can resolve a number of issues. Keeping this in mind I searched for one step that could  resolve the issue of year, opponent, at what strength and terrain type. 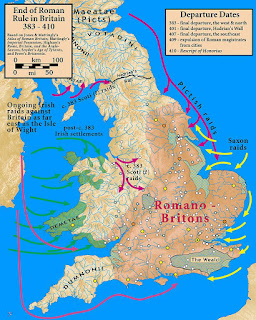