Play testing rule options.
During the development of our DBA campaign system we played with the idea of adding stratagems as an option. Invariably through the course of a campaign season a player could experience a number of setbacks such that implementing a cunning stratagem might even their chance of success.

Stratagems would be available to all players but need to be purchased during the campaign phase - adding reinforcements and supply. Due to their expense a player must plan ahead and build a sufficient reserve of points, however, this may prove difficult as supply and reinforcements will take a higher priority.

The following stratagems were taken from the classic books written by Frontinus and Polyaenus and should prove useful and are easily be integrated into the DBA system.

The Ambush.
The ambush option functions similar to the HOTT rule allowing Lurkers to appear on the table from a hidden position. Up to 3 elements of any “fast” troop type, excepting fast horde (5Hd), may be used to set an ambush. These will be placed during the player’s turn in any  rough or bad going terrain feature and move into contact. This is particularly useful if done in conjunction with an enemy already engaged in combat.

This costs two pips per element to appear and make a tactical move and remain on the board as any other element within the command. They need not all appear at once.

The Gepid as defender had the option to set an ambush and for this they set two Ps aside. Seeing the Gepid formed at the base of the difficult hill, the Tervingi infantry approached in deeper formation with the noble cavalry in support on the right. Wary that the hamlet harbored enemy troops, the Tervingi skirmishers would screen the left flank from possible ambush while skirmishers on the left would clear the hamlet. 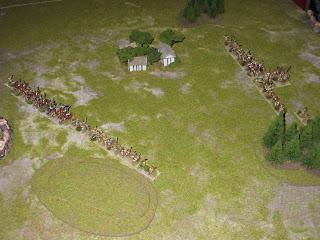 During the battle, Gepid skirmishers, located in the Hamlet, sprung their ambush on the Tervingi light troops entering it. As the battle progressed, the Gepid increased their lead to 3 – 0 and now launched their second hidden element; this one moved toward the Tervingi camp causing more anxiety to the Gepid opponent. 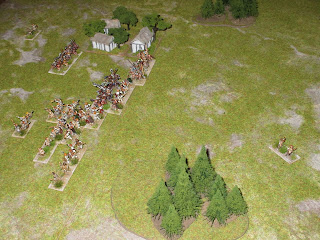 Battle concluded to a 5 - 2 victory for the Gepid.

Next stratagem, the flank march.
Posted by Timurilank at 00:42