Continuing the series of test games this set reflects the rebellious period experienced by Antiochus III. After the death of Seleucus II, Molon, satrap of Media proclaimed himself king in 222 BC. This placed the young Antiochus III under severe pressure to put down an immediate revolt within the empire before pursing any campaign in the east to recover lost territory.

The composition for both armies was identical, but would winning a game be a question of luck?

Test game one.
The Royal army rests its left near the outer wall of the village and the infantry formations including the phalanx extent to the hill on their right. Perched on the crest is Antiochus with the majority of the mounted formations supported by thureophoroi and Cretan archers.
Centering his phalanx across from the Royal army, the Usurper has split his mounted units on either side of the phalanx, auxiliaries and light troops are deployed to either wing. 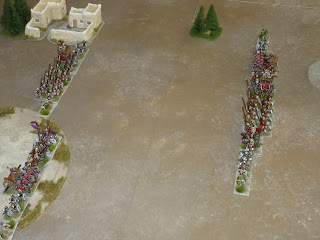 Both sides attempt to wheel to their left, Antiochus is planning to pin the rebel forces against the wood and the Usurper is intent on drawing the Royal army off the hill. 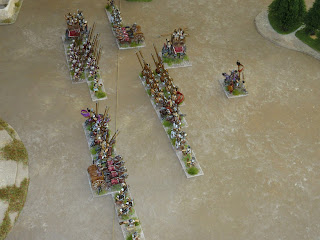 The rebel right flank strikes first sending the royalist back on their heels and in the subsequent bound the rebel left follows up their success by sending Antiochus wounded back to his camp. 2 – 0 for the rebels. 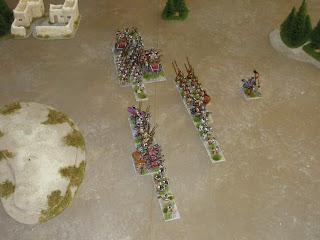 The phalanxes were now operating in smaller chiliarchia while the elephants trundled about creating havoc for both sides. 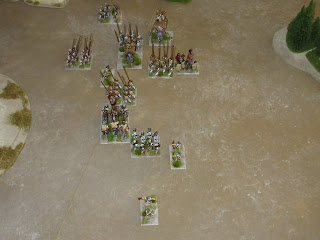 The Silver shields levelled their pikes to send the enemy elephant back on to its own pike unit. This was the final touch to bring a 4 – 2 win for Antiochus who receives news of the victory while having his wounds dressed.

Test game two.
Both armies deployed over ideal terrain for their phalanxes, while the line of hill and wood offered modest protection for both sides the open flank is where both generals positioned themselves and their mounted formations. 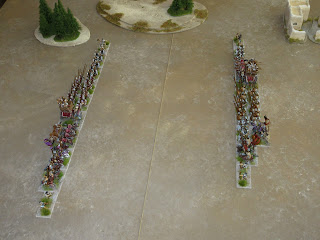 Moving forward at a brisk pace, the Royalist right would strike first followed by the phalanx and support troops. 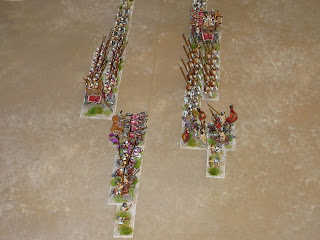 Royalist chariots cut down the head of the rebel cavalry column only to fall victim to the Usurper and mounted guard. Antiochus and Agema swept their opposition and would halt their pursuit the fall on the exposed rebel flank. 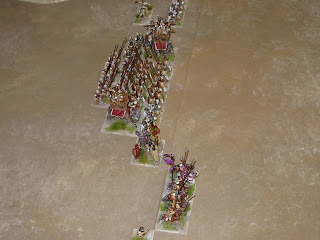 The rebel elephant unit threatened the Silver shields open flank but the timely interdiction of slingers drew the attention of the elephants elsewhere. Elsewhere, the combined effort of the pike and elephants destroyed half the rebel phalanx and the final stroke finished the rebel usurper bringing the battle to an end. Score 7 – 1 for Antiochus. 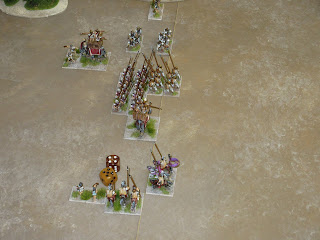 Test game three.
For the final game of the series, both sides formed their units in near mirror image of one another. Would this help the Usurper? 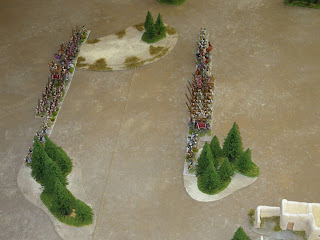 Both sides moved against one another with equal ferocity. 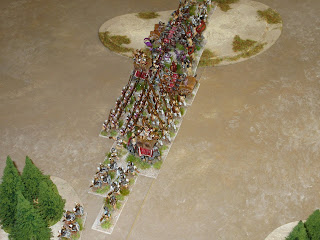 When the dust finally settled, both sides were three down and the battle shifted toward the hill, here both generals were trying to bring the battle to its conclusion. 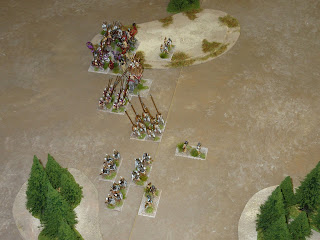 With both sides experiencing low pip scores the infantry of both sides were content to become spectators to the cavalry action taking place on the slopes. The Royalist with a pip score of “2” moved the elephant who trumpeted their delight to help bring the usurper to his death. Score 5 – 3 for Antiochus. 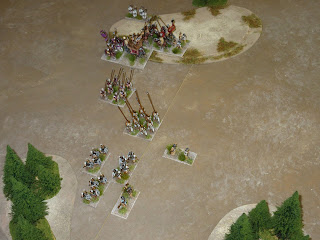