This campaign system has been adapted from the Witcher game and omitting the fantasy elements the rules have been streamlined for ancients use. This newer version used the “war of fire” as coined by Polybius of Megalopolis (The Histories) as its theme and offered an opportunity to improve the conflict resolution and to enhance it with the addition of stratagems.

Armies may move each turn and are only restricted by the type of terrain they move through. No die is used to influence activity or control as this has been replaced by a card system which allow players to outwit their opponent on four different levels. The numbered cards and face cards have a value and each turn (month) players try to accumulate enough points to confront their opponent and gain an advantage over their opponent in the areas of diplomacy, revenue, supply or movement. As cards are drawn from a standard card deck players will have to adapt their strategies to the cards they hold and make fresh plans.

Any encounters between opposing armies on the map are resolved on the game board using DBA 3.0; the winner holding the square and the loser vacating it. Those of you who have played the previous DBA 2.2 are aware that battles may not always involve equal number of element and therefore, optional rules are offered to  allow players to use stratagems such as flank marches, ambushes, deployment advantages and time of day to fight their battles on the game board; these will certainly add fuel to the “fiery war”.

This project’s original design was to refine the Witcher campaign rules and it has served its purpose well. As an ancient campaign set this can easily be adapted for other areas or periods of history involving conquest, rebellion, and political prestige. 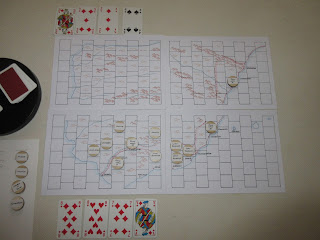 Next post, play testing the campaign rules.
Posted by Timurilank at 01:23