The Roman Army (West) - the Cavalry

During the Severan period, the number of light horse units were noticeably increased, while still maintaining the local “Indigenae” units. The new units were collectively known as Illyrian cavalry which included ex-Legionary cavalry, Scutarii, Mauri and Dalmatae units.

Since my project starts at the opening of the 3rd century I view this as a transition period for the Illyrian units and chose my Light Horse to wearing chainmail armour.

I opted to use the standard Roman heavy cavalry figure listed by OG based six of these as LH with the remainder serving as the Praetorian cavalry. Cavalry are nine figures per pack, so the distribution worked out well.

Phil Barker has the Praetorian cavalry wearing bronze corslet, but also mentions chainmail was used.
The Praetorians turned out better than I hoped as did all the shields.

The remaining Heavies are Gallic, Thracian and Spanish units. A full order of battle will be posted when this collection is completed. 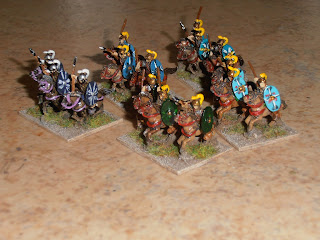 Both units pre-date Severus and would likely of worn armour much like the standard Equites, but with leg and arm protection. Greaves would have been a nice touch. But you cannot have everything the way you would like.

After the downfall of Parthia, many nobles fled to the safety of the Roman Empire and took service adding two later three units of cataphract (+/- 225 AD). No doubt these would be similar in appearance to the models depicted. 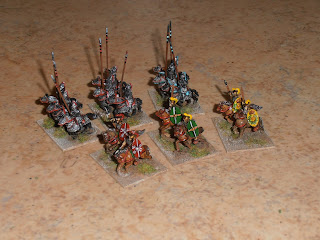 Cheers,
Posted by Timurilank at 07:01