The Roman Army (West) -the Legion

As part of the Sevrean Dynasty project, I will build a big battle size Middle Imperial Roman for the Western Empire. Again, these would be primarily Old Glory 15s; legionary figures would be the same, but the auxiliaries would have the earlier body armour to make them distinct from the Eastern Auxilia. This would make identification easier when fighting battles during the civil war period.

Researching this further, the collection would be modelled after the units gathered by Septimius Severus for his campaigns against his rivals. These were taken from those serving the provinces of Pannonia and Moesia.and were the vexillations of Legions and elite Auxilia units that served with Septimius Severus.

In addition to the standard heavy cavalry units, there are two units of Contarii or Cataphract which are an option.

Other than their outward appearance, the two lists (Western and Eastern) are nearly identical. Campaigning the civil wars are an option of course, but of greater interest are the battles between Rome and the Sassanid. After completion, the Roman collection will number six commands each.

Although “Armies and Enemies of Imperial Rome” depict shield patterns for Romans of this period, I actually found a number of websites that offered good colour representations. Inspired by these, I played with different shades of red and painted wings of either yellow, near orange or white.

The two elements in the foreground are the I and II Adiutrix (Marines) and behind are two elements each of X and XIV Gemina (Martia Victrix). The tridents turned out passible, but the Dolphins, so-so. I am pleased with the wings. 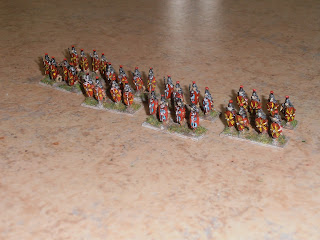 .
Part of the reforms set by Severus was a re-constituted Praetorian Guart and the II Parthica garrisoned outside of Rome. These two units are also represented here. 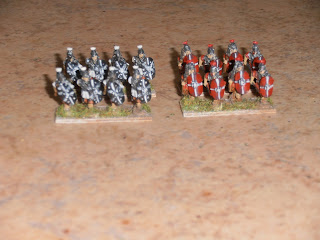 Cheers,
Posted by Timurilank at 02:13