These older Old Glory Sarmatian cavalry were refurbished and detailed which brightened the collection up. Not quite enough for a DBA command, I ordered enough packs to fill out two commands. 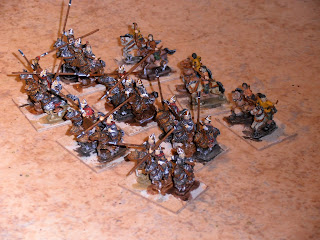 These will eventually fight alongside my Early Germans, Carpi or with the Alani. I have also enjoyed battles using two commands a side. These games are marginally longer, but still take less than an hour to play.

The additional cavalry and foot took about a week to paint. Quite an imposing force to run havoc among the Romans. 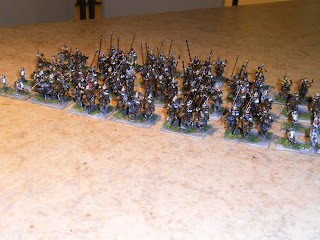 There is a lot on the Internet about Sarmatians but no one site can present a clear picture detailing their history. Greek historians refer to them as Scythian, others find the term Sarmatian to include the Rhoxolani, Iazyges or Jazyges, and Alani.


My search focused on the later 2nd and 3rd centuries. This was a period of migration and Sarmatian settlements covered an area stretching from the Caucasus to the Danube basin.

The following links are an interesting read on the subject as the author presents a lot of information.

I am not sure if you found this, but scroll down half a page to the section "The Alani Kingdom in the Crimea". The relief showing the son of Andromenos is interesting.