On the periphery – the Caucasian kingdoms (Albania)

These three armies were the result of a bulk purchase of Essex figures. For the most part these were Cappadocian and clothing styles were well suited for what I had in mind.

The 18 packs of figures were sorted into three commands giving the tribesmen of Iberia stronger number of foot (Ax), Albania more mounted and Colchis/Lazika, with their longer history of contact with Rome, more spear armed infantry (militia) and a few knights.

The collection now consists of 42 elements which gives me options for particular scenarios. 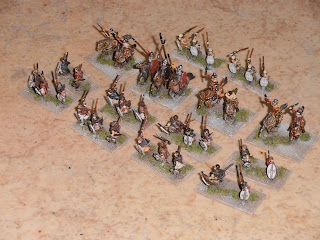 The infantry are nearly done, these lack only some highlighting and of course shield designs. Cavalry are in the background and after lunch I will work on lining and highlights for them.

While painting, I am searching about the net for nuggets of information. In general, Albania tended toward a pastoral economy which brought many tribes in conflict with their Iberian neighbors.

On a number of occassions during the 2nd and 3rd century, Rome interceeded on behalf of Iberia to settle disputes.

For further reading covering the geography I would suggest Strabo. Although, written in the 1st century AD, he does give some interesting tidbits of information. Iberia is amply handled.