Armenia in the 2nd/3rd century.

After a period of independence, followed by Roman rule, Parthia regained control over the province of Armenia by the late 2nd century. The situation was helped by an epidemic among the Roman forces which Parthia seized the opportunity to retake much of their lost territory in Armenia. This forced, the then client king Sohaemus to flee the country to Syria.


In 198 Vologases II assumed the Parthian throne and named his son Khosrov I as successor. Septimius Severus’ invasion of Parthia was delayed briefly to campaign in Armenia. Khosrov I was subsequently captured by the Romans, who installed one of their own to take charge of kingdom. However the Armenians themselves revolted against their Roman overlords, and in accordance to new Rome-Parthia compromise, Khosrov I's son, Tiridates II (217–252) was made king of Armenia.

After the collapse of the Arsacid Dynasty (221-227) in Persia, the conquest of Armenia became an objective for Ardeshir I. As part of reestablishing Persia’s former glory, Zoroastrianism was proclaimed the state religion which would become a source of friction in Armenia. In 252, Shapur I occupied Armenia forcing Tiridates II to flee; the immediate presence of the magi followed by fire temples would make it clear that Armenia was now part of the Sassanid Empire.

Shapur I installed his own son Hurmazd on the Armenian throne. When Shapur I died in 270, Hurmazd took the Persian throne and his brother Narseh ruled Armenia in his name. 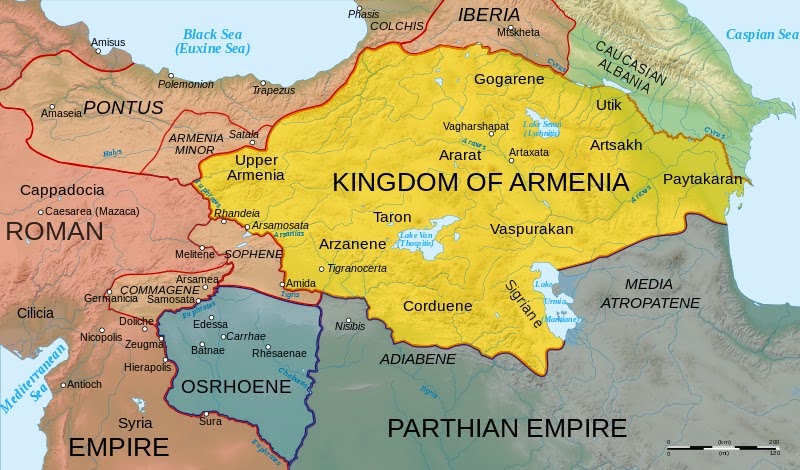 In 285, Diocletian would wage a successful campaign against Persia and as one of the conditions for a peace settlement was the establishment of independent Armenia. This was conceded and in 287, Tiridates III was set as King of Armenia.

Tiridates III as ruler, was in possession of the western parts of Armenian territory. The Sassanids stirred some nobles to revolt when Narseh left to take the Persian throne in 293. Rome nevertheless defeated Narseh in 298, and Khosrov II's son Tiridates III regained control over Armenia with the support of Roman soldiers.

Compiled from a number of sites and Wiki.

I have found the capsule overviews, such as this one for Armenia a useful reference tool for devising scenarios our games centred on the 3rd century. Rome had a number of campaigns as well as Parthia and later Sassan Persia; these will offer some interesting introduction games. Of further interest are the kingdoms on the periphery of Armenia.

Sasanian Persia, The Rise and Fall of an Empire by Touraj Daryaee offered some useful direction and prompted me to look to the smaller kingdoms of Kolkhis, Iberia, and Albania.

I had not realised how great a threat the nomadic tribes north of the Caucasus were until I read about the defensive measures that were set in place. Aside from the forts, some villages had no need of walls as each house was fortified. Somewhat reminiscent of the fortified manors of Roman Africa.