The Duchy of Saxony (Low German: Hartogdom Sassen, German: Herzogtum Sachsen) originally was the settlement area of the Saxons in the late Early Middle Ages, when they were subdued by Charlemagne during the Saxon Wars from 772 and incorporated into the Carolingian Empire (Francia) by 804. Upon the 843 Treaty of Verdun, Saxony was one of the five German stem duchies of East Francia.

According to the Res Gestae Saxonicae by 10th century chronicler Widukind of Corvey, the Saxons had arrived from Britannia at the coast of Land Hadeln in the Elbe-Weser Triangle, called by the Merovingian rulers of Francia to support the conquest of Thuringian kingdom. More probably, Saxon tribes from Land Hadeln under the leadership of legendary Hengist and Horsa in the late days of the Roman Empire had invaded Britannia. (see Anglo-Saxon settlement of Britain).

The Royal Frankish Annals mention a 743 Frankish campaign led by the Carolingian Mayor of the Palace Carloman against the Saxons, followed by a second expedition together with his brother Pepin the Short the next year. In 747 their rebellious brother Grifo allied with Saxon tribes and temporarily conquered the stem duchy of Bavaria. Pepin, Frankish king from 750, again invaded Saxony and subdued several Westphalian tribes until 758.

In 772 Pepin's son Charlemagne started the final conquest of the Saxon lands. Though his ongoing campaigns were successful, he had to deal with the fragmentation of the Saxon territories in Westphalian, Eastphalian and Angrian tribes, demanding the conclusion of specific peace agreements with single tribes, which soon were to be broken by other clans. The Saxons devastated the Frankish stronghold at Eresburg; their leader (Herzog) Widukind refused to appear at the 777 Imperial Diet at Paderborn, retired to Nordalbingia and afterwards led several uprisings against the occupants, avenged by Charlemagne at the (alleged) Massacre of Verden in 782. Widukind finally had to pledge allegiance in 785, having himself baptised and becoming a Frankish count. Saxon uprisings continued until 804, when the whole stem duchy had been incorporated into the Carolingian Empire.

Afterwards, Saxony was ruled by Carolingian officials, e.g. Wala of Corbie (d. 836), a grandson of Charles Martel and cousin of the emperor, who in 811 fixed the Treaty of Heiligen with King Hemming of Denmark, defining the northern border of the Empire along the Eider River. Among the installed dukes were already nobles of Saxon descent, like Wala's successor Count Ekbert,  a close relative of Charlemagne. 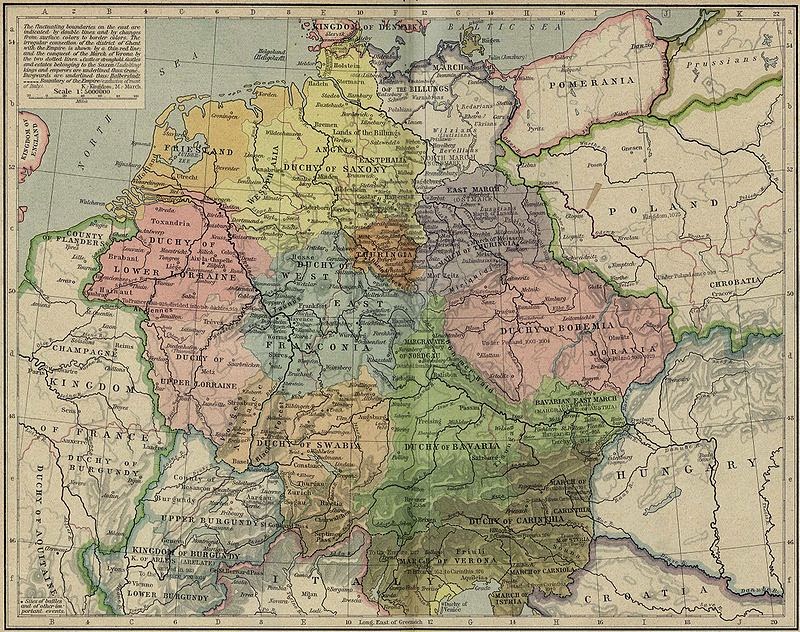 Younger stem duchy
Subdued only a few decades earlier, the Saxons rose to one of the leading tribes in East Francia. Liudolf's elder son Bruno (Brun), progenitor of the Brunswick cadet branch of the Brunonen, was killed in a battle with invading Vikings under Godfrid in 880. He was succeeded by his younger brother Otto the Illustrious (d. 912), mentioned as dux in the contemporary annals of Hersfeld Abbey, which however seems to have been denied by the Frankish rulers. Otto's position was further secured through marriage to Hedwiga of Babenberg, daughter of mighty Duke Henry of Franconia, princeps militiae of King Charles the Fat. As all of Hedwiga's brothers were killed in the Franconian Babenberg feud with the rivalling Conradines, Otto was able to evolve the united Saxon duchy under his rule.

In 911 the East Frankish Carolingian dynasty became extinct with the death of King Louis the Child, whereafter the dukes of Saxony, Swabia and Bavaria met at Forchheim to elect the Conradine duke Conrad I of Franconia king. One year later, Otto's son Henry the Fowler succeeded his father as Duke of Saxony. According to the medieval chronicler Widukind of Corvey, King Conrad designated Henry his heir, thereby denying the succession of his own brother Eberhard of Franconia.

Kingdom of Frisia
In the 7th and 8th centuries, Frankish chronologies mention the northern Low Countries as the kingdom of the Frisians. This kingdom comprised of the coastal provinces of the Netherlands, from the Scheldt to the Weser and the German North Sea coast and further east. Known as Greater Frisia, the inhabitants spoke a common language.

The 7th-century Frisian realm (650-734) under the kings Aldegisel and Redbad, had its centre of power in the city of Utrecht. Its ancient customary law was drawn up as the Lex Frisionum in the eighth century. Its end came in 734 at the Battle of the Boarn, when the Frisians were defeated by the Franks, who then conquered the western part up to the Lauwers. They conquered the area east of the Lauwers in 785, when Charlemagne defeated Widukind. The Carolingians laid Frisia under the rule of grewan, a title that has been loosely related to count in its early sense of "governor" rather than "feudal overlord".

This Frisia Magna was partly occupied by Vikings in the 840s, until they were expelled between 885 and 920. I am of the opinion the Vikings did not conquer Frisia, but settled in certain parts (such as the island of Wieringen). From these locations they continued their trade with the native Frisians. 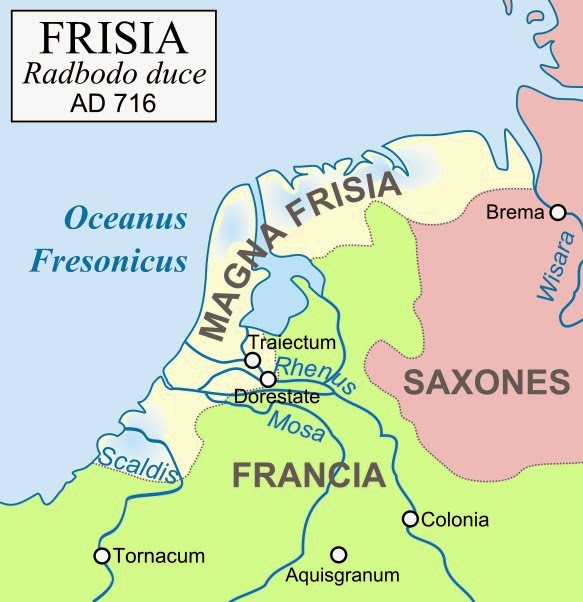 Central Region
Duchy of Thuringia, The Sorbs, Duchy of Franconia