Louis was a grandson of Charlemagne and the third son of the succeeding Frankish Emperor Louis the Pious  was made the King of Bavaria from 817 following the Emperor Charlemagne's practice of giving a local kingdom to a family member who then served as the local governor. The division of the empire by Louis I in 840 meant Louis II would be made King of East Francia. East Francia at this time has been covered in three earlier postings. Here, I will highlight his struggle to hold the kingdom together until his death in 876. 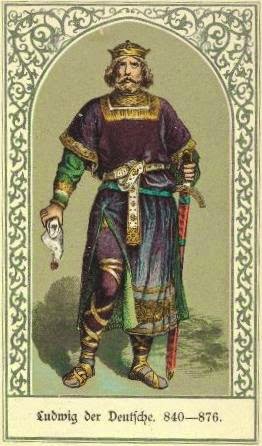 Civil war, 840–843
When Louis I died in 840, Lothair claimed the whole Empire prompting Louis II to ally himself with the half-brother, Charles the Bald. At the Battle of Fontenay in June 841, Louis II and Charles were able to defeat Lothair. In June the following year, the three brothers met negotiate a peace, and arrange the boundaries of their respective kingdoms. The resolution, known as the Treaty of Verdun, confirmed Louis II holdings east of the Rhine (Eastern Francia), together with a district around Speyer, Worms, and Mainz, on the left bank of the river. His territories included Bavaria (where he made Regensburg the centre of his government), Thuringia, Franconia, and Saxony, hence the appellation of “the German”.

Having in 842 crushed the Stellinga rising in Saxony, in 844 he brought the Obotrites to heel by putting their prince, Gozzmovil, to death. Thachulf, Duke of Thuringia, then undertook campaigns against the Bohemians, Moravians, and other tribes, but was less successful against the Vikings.

Conflict with West Francia
Following unrest in Aquitaine, Louis II sent his son, Louis the Younger to secure the throne as the people of Aquitaine had enough of the misrule of Charles the Bald. After a number of futile attempts, Louis II supported by his nephews Pepin II and Charles, King of Provence, invaded Aquitaine in 858. Charles the Bald could not even raise an army (treachery and desertion) to resist the invasion and fled to Burgundy.

In 855, the emperor Lothair died, and Louis and Charles for a time seem to have cooperated in plans to divide Lothair's possessions among themselves — the only impediments to this being Lothair's sons: Lothair II (who received Lotharingia), Louis II (who held the imperial title and the Iron Crown), and the aforementioned Charles. In 868, at Metz they agreed definitely to a partition of Lotharingia; but when Lothair II died in 869, Louis the German was lying seriously ill, and his armies were engaged with the Moravians. Charles the Bald accordingly seized the whole kingdom; but Louis the German, having recovered, compelled him by a threat of war to agree to the Treaty of Meerssen, which divided it between the claimants.

Heir to the throne?
The later years of Louis the German were troubled by risings on the part of his sons, the eldest of whom, Carloman, revolted in 861 and again two years later; an example that was followed by the second son Louis, who in a further rising was joined by his brother Charles. In 864, Louis was forced to grant Carloman the kingdom of Bavaria, which he himself had once held under his father. The next year (865), he divided the remainder of his lands: Saxony he gave to Louis the Younger (with Franconia and Thuringia) and Swabia (with Raetia) to Charles, called the Fat. After taking Bari from the Saracens in 871, Louis was held hostage by Sergius of Naples, Waifar of Salerno, Lambert of Spoleto and Adelchis of Benevento. He was later released after swearing never to return to southern Italy. A report that the emperor Louis II (of Italy) was dead led to peace between father and sons and attempts by Louis the German to gain the imperial crown for Carloman. These efforts were thwarted by Louis II, who was not in fact dead, and Louis' old adversary, Charles the Bald.

Louis was preparing for war when he died on 28 August 876 at Frankfurt. He was buried at the abbey of Lorsch, leaving three sons and three daughters. His sons, unusually for the times, respected the division made a decade earlier and each contented himself with his own kingdom. Louis is considered by many to be the most competent of the grandsons of Charlemagne. He obtained for his kingdom a certain degree of security in face of the attacks of Norsemen, Magyars, Slavs, and others. He lived in close alliance with the Church, to which he was very generous, and entered eagerly into schemes for the conversion of his heathen neighbours.