The armies of Bavaria-Ingolstadt met the Imperial forces near the hamlet of Birkendorf. The Imperial forces were hampered by the enclosed fields and the hamlet, but deployed their pike and crossbow flanked by knights. Further extending the flanks were feudal lords (Kn) and Coustilliers (Cv).


The Bavarians mirrored the Austrian deployment, but extended their pike frontage backed by blades. 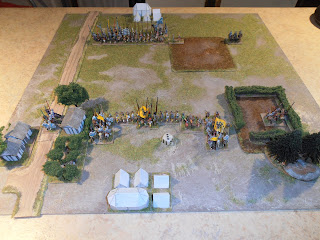 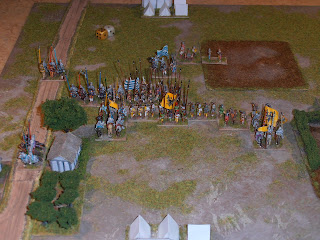 Photo one shows both sides deployed for battle. Displaying no form of finesse, both lines moved as solid walls toward each other. The crash of steel on steel and the cracking of pike on breastplate delivered up in quick succession a knight and crossbow element. 2-0 for Bavaria.


At this moment, the flanking Austrian mounted forces moved in, while the pike block engaged the Bavarian pike. The cavalry of both sides found themselves engaged in isolated combat while the centers struggled on. During this bound, the Austrians evened the score 2-2. The loss of a pike element brought the Austrian pike block in contact with the supporting blade. As though drawn by a magnet, the isolated engagements by the knights were moving closer toward the infantry battle. 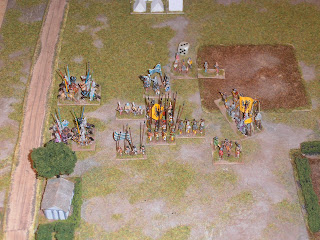 The decisive stroke taken by the Austrian was to engage their general. Launching the Hang gunners in the direction of the Bavarian artillery, both generals were now locked in battle. It seemed only a matter of time before recoiling knights would be crushed with no more room to maneuver. 3-2 for Austria. 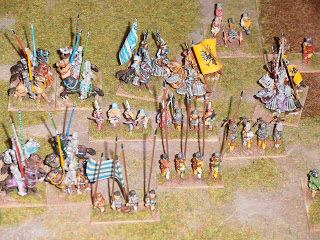 It was now a soldier’s battle. Only the artillery remained spectators while the mounted crossbow and Coustilliers were pulling faces, everything else was locked in combat and all knightly combat recoiled closer toward certain doom. The Bavarian blade held against the Austrian pike giving time for support troops to encircle them. This was decisive as the loss of the pike block ended the game, 4-3 for Bavaria.


I enjoyed the subtle changes made. The differences between Bad Going and Rough Going were nice, but will need practice in placing them on the game board.


The BUA modifications are an improvement as I have now an excuse to “pretty up” the terrain pieces.


The camps were improvised as the tentage was taken from my SYW collection. Camp followers have been ordered and these will become my next project when the Late Hungarians are done.


If the Bavarian deployment seemed cramped, this was done in anticipation of the plough field being a problem. It was not.


In some cases the choice of recoil, base depth or 1 BW was critical for the knights.
Posted by Timurilank at 15:29