Count Bonifacius and the Vandal threat

“Bonifacius, the African army, and a contingent of supporting Gothic foederati confronted and were defeated by Gaiseric near the city of Calama in 430, after which Bonifacius retreated to the city of Hippo Regius.” - Wikipedia

The Vandals departed Hispania for Northern Africa in 429, whether this was at the behest of Bonifacius or on Gaiseric’s own initiative, is still debated among scholars. I am inclined to the latter, as Gaiseric was shrewd enough to view an opportunity offered by the conflict between Bonifacius and F. Constantius Felix reducing Africa’s military strength. More importantly, a move to Africa would avoid further entanglement with the Suebi.

Alan and Gothic troops joined the Vandal army and together they quickly overran opposition in modern day Morocco and northern Algeria. Coloma was Gaiseric’s next target as it provided a vital grain supply, seizing it would cripple the food supply to Rome and feed his own people and troops.

The battle is described as having taken place “near” the town of Coloma which is located on a relatively open plain bordered by hills, these would likely be covered with fields of grain or vineyards. A fortified residence of a rich patrician would not be out of place on the game table and slicing the battlefield, a paved road. The siege of Hippo Regius began in May or June, which would make April as the possible month of our battle.

Using the Notitia Dignitatum to determine the units forming Bonifacius’ army would most likely have changed as troops relocated to stem the German migration or join the civil conflicts that flared between 395 and 429 AD. To simplify the composition of the Roman force, I used the DBMM Patrician list as an extra reference. This produced a greater number of auxilia to represent the border police detachments and light horse. 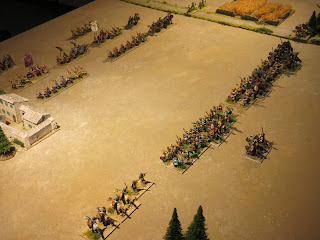