The Wedge formation in DBA3

DBA3 lists several armies with cavalry in double based wedge formation; the Nikephorian Byzantine, Medieval German and the Teutonic Order. The brief text. accompanying each list, describe differently armed or knights in full plate armour in front and lesser armoured types placed to their rear forming a deep wedge or ‘spitz’. These differ visually from cavalry placed in two rows of 3, such as the ally Lorrainer cavalry of the Swiss and the kavaillaroi of the Thematic Byzantine. Both double based elements add +1 if in frontal close combat with enemy foot and the DBE is entirely in good going.

Since the start of this project (late 15th century) I have encountered few examples of German armies employing the deeper wedge formation; Tannenberg (1410) and during the First Margrave’s War (1449) come to mind. What is noteworthy, most conflicts within the Holy Roman Empire. in the last half of the 15th century, do not record large numbers of mounted troops with fully armoured types (3Kn) accounting for a small portion of the total. Reasons for this have been covered in an earlier post, see Cities and Towns, but foremost is the increased tactical use of infantry (pikemen, handgunners) and field artillery.

Where does this leave the double based wedge (6Kn) of the Medieval German Army lists? The number of mounted troops, as mentioned earlier, was relatively small with the “lance or gleven” deploying in separate formations; one of armoured men-at-arms, coustilliers and mounted crossbowmen (later handgunners); a tactic used by Fredrich I, count of Palatine, at the Battle of Seckenheim (1465). Between the years 1480 and 1493, Philipp von Seldeneck, who fought on the side of Fredrick I, wrote a tactical treatise, ‘Ordnung für grosse Heere und Schlacten’. I was fortunate to stumble across an analysis of the work presented in a monograph by Erik Neubauer, and published at the University of Heidelberg in 1963.

The treatise is divided in sections, four describe the wagenburg, infantry formations, infantry tactics, and the last two, the cavalry. The section, Cavalry Organisation, von Seldeneck details the formation of a wedge consisting of 1000 cavalry, outlining the number of rank and files required. One gains the impression that this is an ideal formation as it is followed by examples of smaller formations consisting of 200 or 100 cavalry. Considering the number of cavalry employed the last half of the 15th century, such as Pillenreuth, 1450, Seckenheim, 1465 and between Poland and the Teutonic Order during the Thirteen Years War (1454 – 1467), it would not seem unreasonable if wedges were used, these would be formed with smaller numbers.

Returning to DBA3, there are two examples of cavalry in a single based wedge; the Macedonian Companions and Scythian nobles. These look pretty, however do not gain the +1 in frontal close combat with foot troops plus have the inconvenience of recoiling their base depth (1BW) which can become hazardous. This becomes less a problem if players follow the tactics written by von Seldeneck,

Since the publication of DBA3, there have been a number of interesting suggestions exchanged at the DBA Fanaticus Forum concerning the effectiveness of light horse. One suggestion which has gained traction, LH ignore enemy in corner-to-corner contact with its front edge. This is similar to the exception allowed to psiloi and Scythed Chariots when in frontal close combat with an enemy. Wedge formations would also benefit from a similar rule, ignoring enemy corner-to-corner contact, as this would compensate for the lack of a +1 for the support enjoyed by the double based element by allowing it to focus on an enemy to its front. 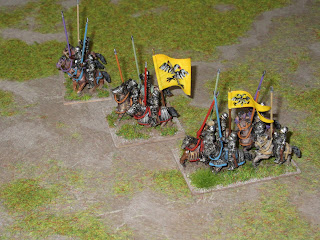