The March To Battle

The Art of Warfare In Western Europe During the Middle Ages by  J.F. Verbruggen, gives a detailed analysis of the various components of medieval warfare, such as the mounted arm, foot soldiers, command and more. In chapter IV, Ggeneral Tactics, the march to battle caught my attention and interested me enough to experiment with it on the game board.

In DBA3, following the placement of terrain pieces the defender deploys his troops followed by the attacking player. These are positioned no closer than 480 paces from his opponent’s line. There are however, a number of historical examples that demonstrate how contact between advance parties escalated to a full scale battle.

With the following tests I would like to explore the development of battle away from the procedure as described above. Commanders must contend with a fluid situation and make a quick assessement to seize key terrain or deploy for battle. Pip scores will heavily influence the positioning of troops, but that is the objective with the following tests. Hopefully, the following examples may interest others to experiment with their own collections.

Below is an engagement between the infantry heavy armies of Neustria, blue banner and Austrasia, red banner, in Northern France.

Test game
Spearheaded by advance parties of cavalry and skirmishers, these spy one another across an open plain. Maintaining a steady pace of 2BW per turn, the remainder of the army slowly move their columns and deploy on the battlefield. 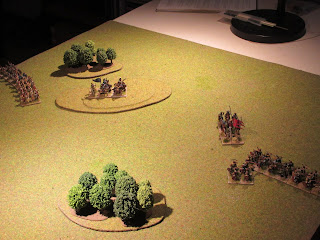 Evaluating the situation, the Austrasian commander directs his warriors (4Wb) to form on the left with the spearmen (Sp) forming behind in support. The Austrasian cavalry screen this operation to its completion.

Opposite, the Nuestrian commander and cavalry have seized the gentle hill and deploy their own spearmen to face the Austrasian warband positioned between hill and woods. The Nuestrian warband, trailing at the rear of the column, deploy on the reverse slope hidden from view by the enemy. 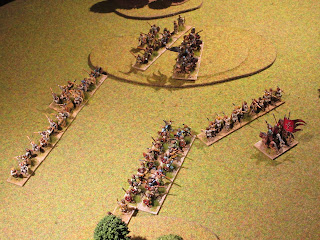 Two hours have passed (8 turns) since the initial sighting and with orders passed to the troops the Austrasia begin the battle advancing their warband toward the Neustrian shieldwall. The spearmen move forward in support. 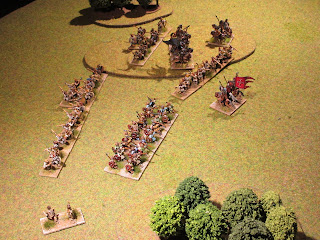 In the ensuing clash on the left, the warband are repulsed by the Neustrian spearmen. Advancing toward the hill, the Austrasian spearmen with the help of the Austrasian cavalry  intend to sweep the enemy off its crest. 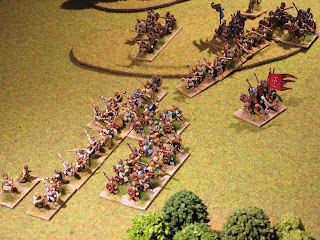 Renewing their effort against the Neustrian spearmen, the warband breach the shieldwall and though a minor victory, this was overshadowed by the quick destruction of Austrasian units on the slopes of the hill. From their concealed position, the Neustrian warband broke the Austrasian spearmen adding to the increasing casualty toll created by the Neustrian cavalry giving Neustria a clear victory, 5 – 3 (game length: 12 turns in 45 minutes). 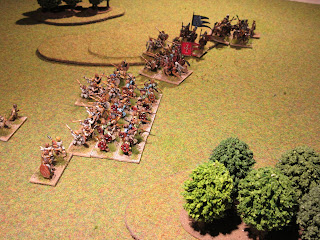 A suubsequent action is planned, this being an all cavalry encounter. This should take place next week. Following the two reports I will post a review adding a few suggestions for readers experiment with their own 'March to Battle' games.
Posted by Timurilank at 00:37