530 – 534 AD
Chlodomer dies in 530 leaving no heir to succeed him. Both Childebert and Theuderic seize on the opportunity to enlarge their domains, but first the Visigoths must be forced out of Aquitaine. Recalling the Burgundian debacle, a joint venture by Childebert and Theuderic is out of the question and Childebert solicited help form Chlothar. Their planned expedition was cut short by the unexpected incursions by Saxons and Frisians. Each moved to intercept the invading forces.

Accused by his brothers for instigating the invasions by Saxons and Frisians, Theuderic successfully seals an alliance with Burgundy; an agreement would ensure the protection of Burgundy against Visigothic aggression and safeguards Theuderic’s lands bordering Aquitaine. A union of the royal houses was planned for the following year.

The Bavarians march into Thuringian territory in 533 and defeat their army. The loss of their king in that battle forced the vassal kings of Thuringia to seek help across the Rhine to fight the Bavarians.

Battle reports: Childebert confronts the Saxons, Chlodomer the Frisians and the Bavarians clash once again with the Thuringian. 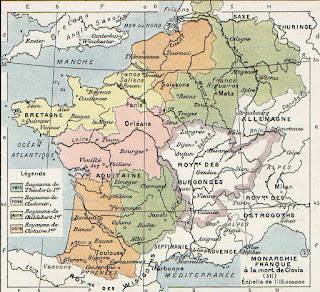 535 – 539 AD
During the winter of 534, Childebert and Chlothar meet in Paris and discuss how best to deal with the current situation and postpone the campaign for Aquitaine. The Saxons had spent the winter near Bayeux this would mean more raiders would surely follow in the spring. Chlodomer had some respite as the Frisians favoured their island homeland more, but would certainly return the following year.

Claiming Armorica as a vassal state, Childebert ordered its troops to meet with his forces near Bayeux to deal with the Saxons in the spring. The Bretons eagerly assembled its troops to meet Childebert, not at Bayeux, but at the frontier with sword and spear in hand to discuss this misconception of ‘vassal state’. Seething with anger, Childebert assembled the army to deal first with the ‘revolt’ before marching on the Saxons. Further to the south, the Visigoths expand their hold in Aquitaine.

Theuderic did not live long to enjoy his victory over the Bavarians, but his death in 534 did bring small joy to Childebert and Chlothar as both were recovering from humiliating setbacks by Saxon and Frisian armies. Theuderic was succeeded by his son, Theudebert, an experienced commander having gained a reputation in the wars across the Rhine and a skilled diplomat as he was the principle architect of the treaty between Metz and Burgundy.

As the winter of 539 approached, both Childebert and Chlothar rebuild their lost manpower and more importantly the finances needed to sustain it for the planned campaign for Aquitaine. The Visigothic king knew this and was aware the failed Frankish mission to bring the Byzantines into the proposed conflict as the East Romans were too involved in Italy to help. The most important question for the moment was ‘what is Theudebert planning? ‘So many things to consider.