Cimbri and Teutones vs. Celtiberian

Following their victory over Rome at the Battle of Arausio, the Cimbri and Teutones crossed into Hispania.

From Livy, Book LXVII, fragment.
"The Cimbrians, having ravaged all the country between the Rhine and the Pyrenees, pass into Spain; where they continue like depredations. The Cimbrians are put to flight by the Celtiberians: and returning into Gaul, they join the Teutons."

The Historical Match up.
Re fighting the confrontation between the Celtiberians and the Barbarian coalition is challenging as so much remains unknown. Both combatants have diverse home terrain (hilly and forest) so I opted for a compromise and placed the three matches in arable terrain; this still offers both sides the use of difficult hills and forest. More importantly however, this would give me an opportunity to use my newly constructed Celtic village.

Game 1
The Cimbri had sufficient room to deploy their army between the village and wood. Facing them were the Celtiberians in a line which easily extended beyond Cimbri line. 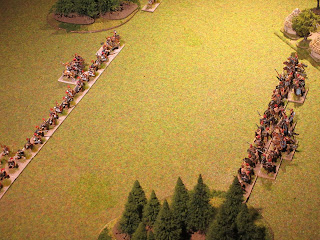 The Celtiberians right flank moved ahead of the main body as they were eager for battle. The supporting caetrati had outstripped them to make first contact. 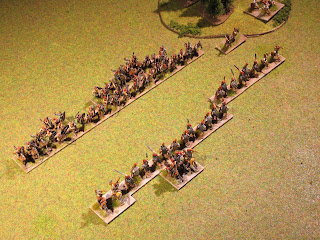 The Celtiberians on the right encountered stiff resistance with one dense column driving the scutarii back. The Celtiberian left were driving their opposition back and rapid slaughter of one warband left a gaping hole in their line. 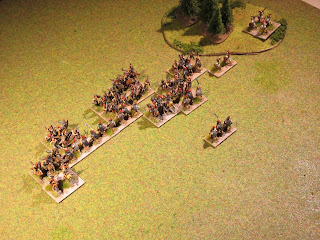 Regaining their composure, the Celtiberians on the right counter attacked the exposed flanks of one dense formation of the Cimbri to quickly roll up the Cimbri left flank which prompted a general retreat. Score 4 -1 for the Celtiberians.

Game 2
This time, the Cimbri deployed closer to their camp leaving the Celtiberians no choice but leave their position near the village. Due to the constricted nature of the terrain, the Celtiberian formed in deeper ranks. 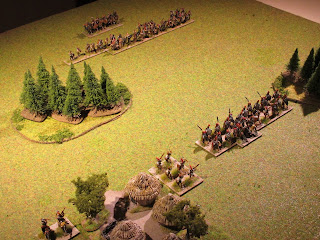 The Cimbri shuffled forward giving time for the scutarii and caetrati to deploy into a line. 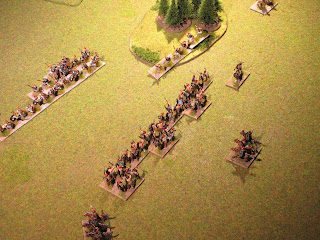 The battle became general up and down the line with neither side giving much ground. During this and the previous bound, there were a high number combats with even scores. Here, the denser formations of warband repelled the looser formation (‘fast’) Celtiberians. Both sides experienced light casualties (1 – 1). 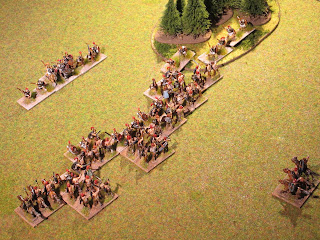 The battle now took a fiercer turn as both sides were taking advantage of exposed flanks and isolated units to bring the number of casualties to a critical level (3 – 3). 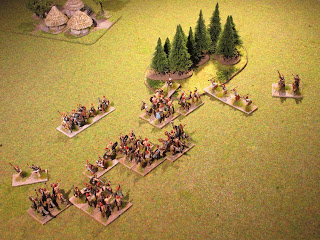 The situation favoured the nimble Celtiberians as they inflicted a few more casualties to save the day. Score 5 – 3 for the Celtiberians. 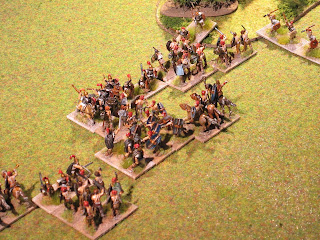 Game 3
For the final match, the Cimbri rested their flanks on the two dense wood. It was hoped the cover would work to their advantage. 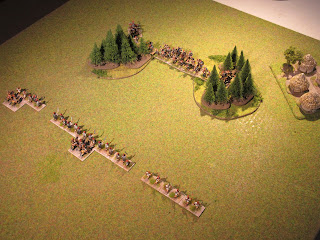 The rapid approach of the Celtiberians gave the Cimbri just enough time to set up position in time to see caetrati closing the distance. 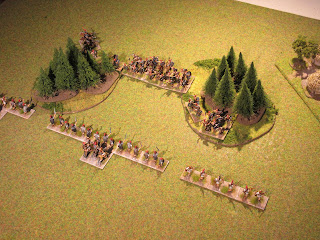 The edge of the wood on the left were easily held by the Cimbri warband. The wood on the right was in question as scutarii were supporting the caetrati. To counter this, the Cimbri sent a unit of warband to even the battle. 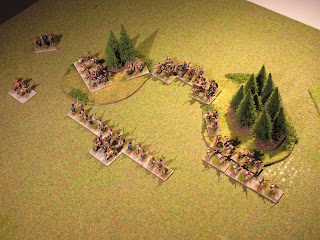 The Celtiberian effort in both woods now stalled it was time to move the majority of the army into battle. 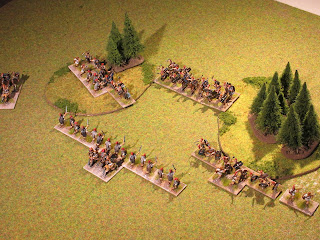 In the ensuing conflict the Celtiberians lost most of their caetrati, but Cimbri casualties were not far behind (3 – 2).

The battle turned as Celtiberians were streaming out of the wood followed by victorious Cimbri warband. This heralded a general retreat and first loss for the Celtiberians. Score 4 – 2 for the Cimbri and Teutones. 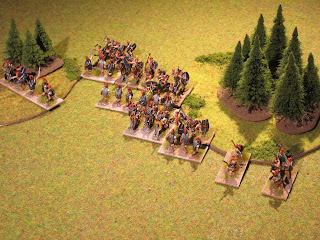