With internal control of the Abbasid Empire in a state of flux, the Tulunid sought an opportunity to become independent ruler of Egypt. Presented with a ‘fait accompli’, the Abbasid Caliphate formally recognized their independent state as vassals of the empire. However, an unstable rule by successive emirs forced the Caliphate to invade Egypt, on to battle.

The Tulunid Army developed into a well organised and highly efficient fighting force. At its core were the Turkish cavalry (ghulams) and the abid infantry and when needed, their ranks were further strengthened with Berber light horse and Ghazi volunteers. The Tulunid have littoral as home terrain.

Game 1
The Tulunid, pictured on the right, were caught in the open facing a well positioned Abbasid force. Archers secured both difficult hills and spanning the terrain between were the Abbasid spear supported by their Jund cavalry. 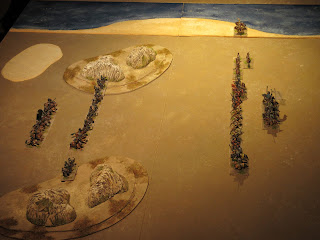 Tulunid skirmishers on the right quickly moved to seize the heights, but this was contested by the Mutatawwiá infantry. Tulunid archers began showering the Abbasid line, but at an extreme range, this had little effect. 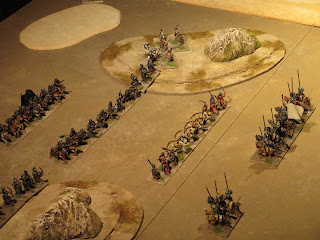 The Tulunid archers met a quick end as the Abbasid infantry pushed forward. This left a gaping hole giving the Tulunid general no option but to commit his reserve cavalry. 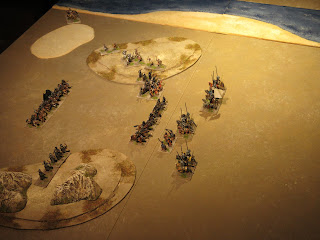 Clearing the hill of Abbasid troops took far longer than expected and this was unfortunate; despite the 3 – 2 advantage, the battle progressed rapidly toward the Tulunid camp. Here, Tulunid resistance collapsed as two units was destroyed, including their commander. Score 5g – 3 for the Abbasid. 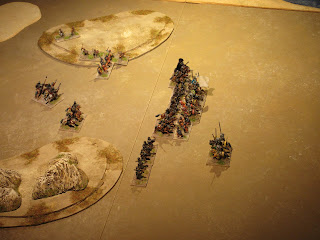 Game 2
Recovering from their defeat, the Tulunid gathered fresh forces and met the Abbasid along the coast of Palestine. One hill dotted the landscape and secured the Abbasid left flank. The Abbasid battle line extended nearly to the shore line. 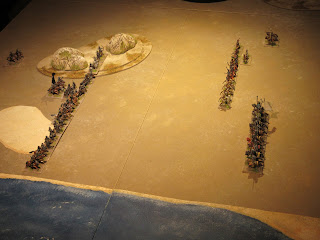 Keeping their formation steady, the Abbasid moved slowly forward. The Tulunid moved quickly forward to contest ownership of the hill and this action was supported by the Abid formations of archers and blade. 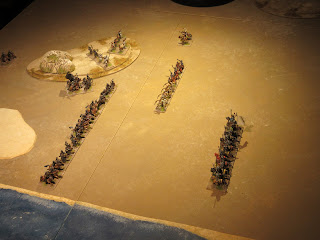 The Tulunid made quick work of the Mutatawwiá infantry and pressed forward to eliminate other enemy. Below, the Abid troops moved to meet the Abbasid spearmen. 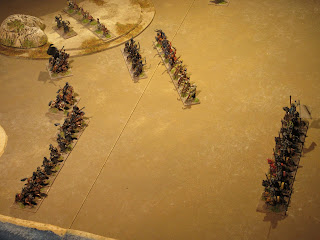 By this time, the Abid units and Tulunid skirmishers had nearly eliminated all the Abbasid infantry earning the victory with the Ghulam cavalry remaining spectators of the battle. Score 4 – 0 for the Tulunid. 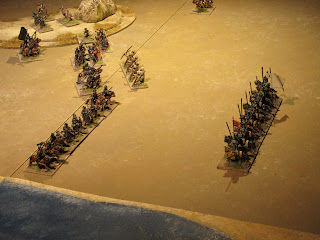 Game 3
The final battle was fought in familiar landscape. The Tulunid deployed their troops in two wings; infantry formed on the right and all mounted units on the left. The Abbasid placed their mounted in the centre with archers on their right and spear on the left flank. 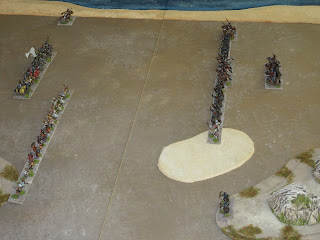 Repeating their tactic of the previous battle, the Tulunid infantry would open the battle clearing the enemy left flank followed by the Abid infantry. Abbasid cavalry slowly moved forward keeping pace with their archers. 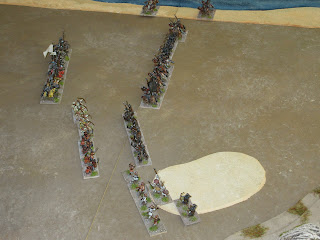 Having cleared the dune of Abbasid troops, the Tulunid skirmishers attacked the exposed flank of the Abbasid spear. With the score now an even 2 – 2, the battle now moved to its next stage, the cavalry charge. 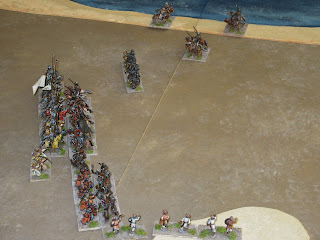 With a slight advantage, the Tulunid bested the Abbasid cavalry and the Abid infantry, not remaining idle added another casualty, bringing the battle to a close. Score 4 – 2 for the Tulunid. 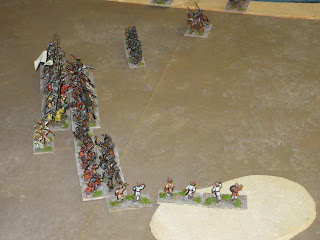