Of a number short lived kingdoms that evolved after the collapse of the Abbasid Caliphate, the Baghdad Buyid were one of the more successful. At their core were a Dailami Dynasty with family members holding key provinces in Western Iran.  Looking at the army composition, their infantry are mainly the Dailami zupin-men supported by archers and crossbowmen with mounted troops supplied by the ghulam units.

During the political transition, many Ghulam units simply changed employers offering their services to the highest bidder. The Baghdad Buyid army list also includes Indian swordsmen, religious fanatics and a small number of Bedouin light horse. Of interest, the Baghdad Buyid are one of the few Muslim armies to have allies, the Kurdish troops, who can supply a good number of elite class cavalry. 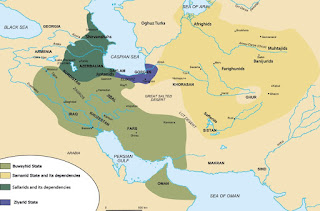 One third of the army are Dailami troops and these were painted with a greater assortment of colour; clothing as well as shields. The Kurdish allies come from an large Mogul Indian collection, most of which are Essex figures. These were re-based and lances re-positioned to give them an animated appearance. Where necessary, the horse tails were shortened to allow better positioning on their bases.

The banners
Banners now show religious script, but how this is placed on the flag does vary between depictions. I will use as a reference, the Andalusian illustrations which show the script running vertical on a coloured background. Each of the Kurdish knights will have them to set them apart from the standard Buyid cavalry. The C-in-C’s banner will display the gold disc which is prevalent at this time.

The Baghdad Buyid in battle array. 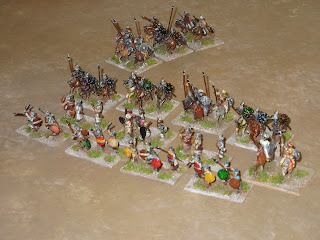