After the conquest of Egypt and brief expeditions along is southern frontier, the armies of the Umayyad continued their conquest of regions bordering the Mediterranean . They overran Byzantine held strong points but the Berber tribes (Later Moorish); problematic. Of these, the Zenata tribe proved the most tenacious.

The Later Moorish are for the ;most part light skirmishing foot and mounted troops. Although they lack troop types capable of delivering a decisive punch, their speed and mobility more that make up for that deficiency. With practice, they can generate some nasty surprises.

Game 1
The Umayyad stiffened their first line with Jund cavalry. To their right all the archers were deployed with the remaining cavalry formed behind them. Moorish infantry took advantage of the rough ground and hill leaving the open spaces between them for the cavalry. 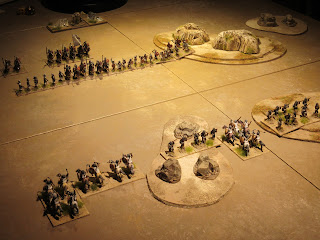 The Moorish infantry moved quickly to seize the hill flanking the Umayyad left while other foot threatened the Umayyad battle line. 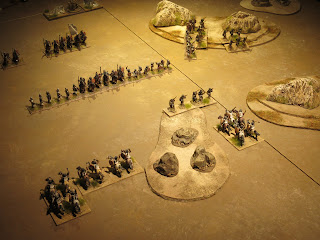 The hill however, was hotly contested by Umayyad skirmishers and Dailami infantry. This changed the battle as the Umayyad infantry were getting the better of the struggle. Moorish cavalry unfortunately remained inert (low pip scores) leaving the Moorish commander no further option than to add his presence to the battle. Too little and too late, the Moors conceded handing a 4 – 1 victory for the Umayyad.

Game 2
The area between hills and rough ground allowed both sides to deploy extended formations. The Umayyad retained a similar plan by placing all their cavalry in the centre. All the Umayyad archers were placed on their right to support their assault on the Moorish centre. 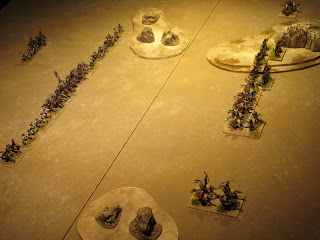 The Moors surprised the Umayyad with an audacious seizure of the rough ground in front of their spearmen. This move was ably supported with more infantry and Moorish light horse. 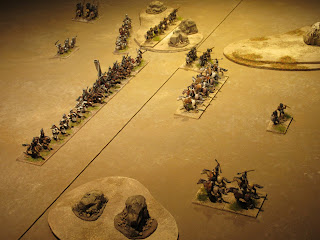 The struggle that followed developed into a tenacious fight with both sides losing heavily. However, the Umayyad edged out the Moors to win with a 4 – 3 victory. 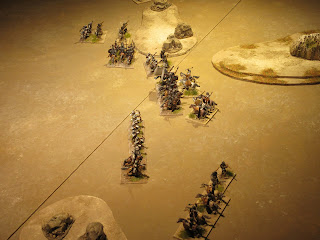 Game 3
As defender, the Moors made use of a dry river bed to secure their left flank while positioning their infantry on both slopes of a difficult hill. Constrained by the limited space the Umayyad formed up in two lines. 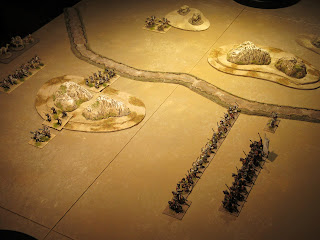 Mountain warfare is characterised by a number of small independent actions and commanders must be ideally placed to maintain a constant link with their troops. For both sides, this battle developed into a surgical operation with gains of ½ BW is a small victory. 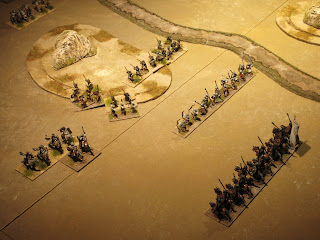 With Moorish infantry well contained with the fight on the hill, the Umayyad cavalry clear the field around the hill of any enemy cavalry. 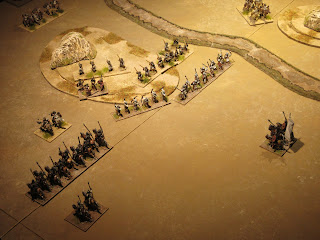 As the Umayyad cavalry were fully engaged, the signal for a general assault was given and the Umayyad spearmen began their attack up the hill. This was risky, as the ground would disorder their ranks but such was the nature of the fight. The last bound saw five casualties removed from the board. Score 6 – 4 for the Umayyad. 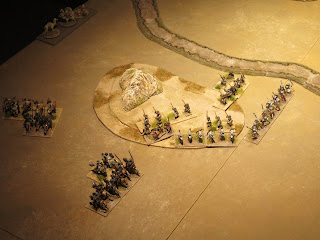