During the 90 years rule of the Umayyad Caliphate, old tribal rivalries generated many stumbling blocks. The changes not only influenced the social order among the Arab tribes but the restructuring of the military had a far greater impact. Up to this time, armies were organised by tribal divisions, but the need to hold existing frontiers against external threats required a permanent military force.

During the later period of the Umayyad, they began restructuring the army by creating permanent paid military force. As the military expanded, so did the need for funds to maintain them and taxation became one of the many sources of friction leading to open rebellion within the Caliphate. Our civil war brings to the field the forces of the Caliphate to meet the usurper.

Game 1
Troops of the Caliphate are deployed on the left of the picture and rebels are on the right. Dunes, an oasis and rocky ground are the only features to break up a relatively flat and open battlefield. Rebel forces have thrown their archers forward in advance of their battle formation. 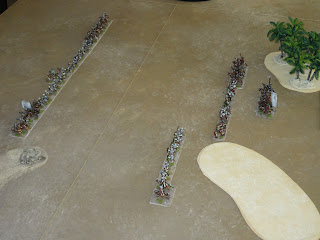 Caliphate troops adjust their lines to make an effective approach. 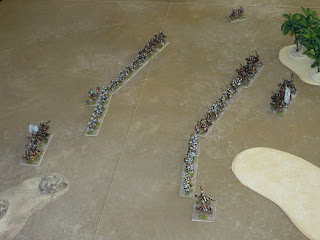 The ensuing clash results in both sides stepping back to reform their lines. Rebel light horse have moved from the left to the right flank to support that effort; but doing so left the rebel archers to fend for themselves; a calculated risk. 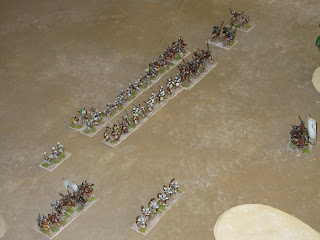 The rebel forces did inflict casualties on the government troops, but it was not enough to earn them a victory. Score 4 – 2 for the Umayyad Caliphate. 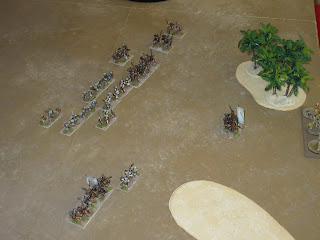 Game 2
The rebel forces, picture on the left, deploy in an extended line with their right flank resting on rocky ground. Government infantry take advantage of the larger rocky ground to position their archers and Dailami infantry there. Spearmen and Jund cavalry extend their line to reach the dunes. 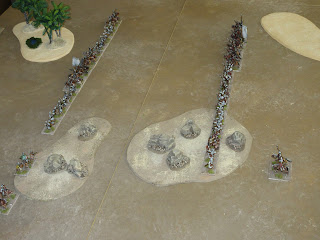 Both sides closed the distance between them and previously neat lines are shredded leaving many flanks exposed. The rebels were quick to take advantage of the opportunity and made up for their previous battle. With heavy losses, the Caliphate general called for a retreat. Score 4 – 2 for the rebels. 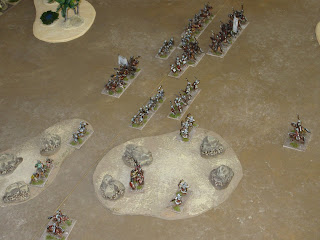 Game 3
Pictured at the top, the rebels form two wings with Dailami mercenaries holding the rocky ground in centre. Having no such obstacle to contend with, the Caliphate troops form on unbroken line with a small reserve. 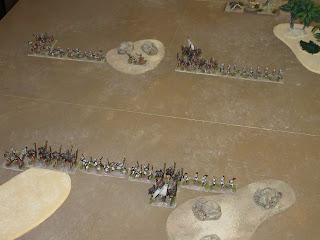 The battle took a strange turn as Caliphate infantry changed their approach and targeted the rebel cavalry. Caliphate troops on the left fanned out to keep the rebel right wing. occupied. 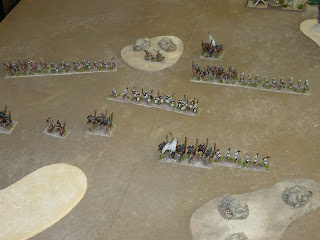 The spearmen held the rebel cavalry at bay leaving government’s Jund cavalry to destroy the rebel units on the outer wings. Score 4 – 0 for the Umayyad Caliphate. 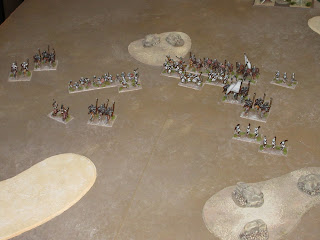