The Witcher Project - The Nilfgaard Empire

Researching the history of Nilfgaard I decided to pre-date the period of the Great War with the Northern Kingdoms and begin the campaign scenarios with the consolidation of the Empire known as the Southern Conquests of 1239.

This offers an advantage of gradually building up the Nilfgaard collection as most of its troops would come from the annexed kingdoms. As the individual armies are completed, I can conduct tests of scenarios and the siege rules as time permits.

The Southern Conquests of 1239.
In 1239, the emperor, known as the “Usurper”  as his actual name is nowhere mentioned in the novels, needed to secure his position and deal with the recalcitrant kingdoms before considering an invasion of the Northern lands beyond the Yaruga River. The long campaign involves a series of methodical invasions and annexation of Ebbing. Maecht, Metinna and Nazair.  All, fall in rapid succession to the mighty armies of Nilfgaard; only Nazair continues its resistance well after the occupation of its lands. 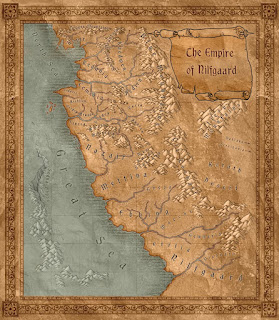 Nilfgaard troops are described in the books as the “Black ones”; this may be a reference to the dark uniforms they wore or describing their evil behaviour toward the people they conquered. Aside from the uniform colour, the sun emblem is seen on their flags, badges, shields and emblazoned on the armour of the elite units. 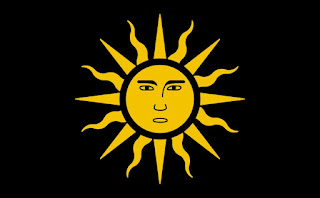 Nilfgaard (revised 14-09-2017)
At the Battle of Brenna, Nilfgaard forces meet the infantry of the Northern Kingdoms and formed their cavalry units in wedge formation. Merging the two lists as one list would offer the Nilfgaard commander a degree of flexibility before deploying his troops. Horse archers should appear as part of an elfin allied contingent. Feudal retainers would represent the vassal contingents of Ebbing and Metinna and mercenaries could form up to half the infantry. Artillery was not found on the battlefield but would be present for sieges. War wagons can be used if Nilfgaard is defender; these can replace up to 2 crossbowmen. 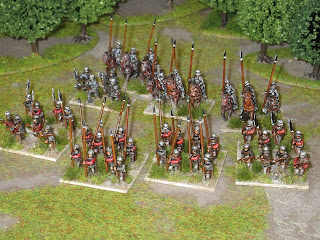 The first twelve elements are ready to take the field. Additional figures will represent the vassal kingdoms of Ebbing and Metinna. At the moment of writing all the armies lack flags, but these will be added this week. Based on the latest book, new troops will be added to cover the options added to the army list. As these are completed they will be added to this page.