Under the Black Banner project.

The three Christian kingdoms of Alodia, Nobatia, and Makuria are located in the region currently known as Dongola in the Sudan.  They faced a number of regular incursions by, the Umayyad, the Abbasid, the Tulunid, and the Fatimid armies. Nobatia and Makuria eventually made the change from Christianity to Islam around the 13th/14th century and the small Nubian state of Alwa changed at the end of this period.

Its army closely resembles the Nobades with its reliance on the bow and spear for the infantry. The cavalry and light horse are supported by a large force of camel mounted warriors capable of charging enemy. Since the project focuses on the Abbasid, the Christian Nubian makes a nice adversary for them. Further, the Umayyad will be added to the project and the Nobades which are currently in the collection will keep the Christian Nubian busy with minor campaigns along the Nile.

The miniatures
All miniatures are from the Old Glory Arab Conquest, Andalusian and Crusade lists and from the initial order of eight packs I build four armies. The biggest challenge, as all figures similarly clothed, was to create a colour theme that would best represent each so as to make them distinct from one another. The Christian Nubian are dark skinned and a light colour was selected with white dominant followed by beige and saffron. The mass of light coloured clothing would contrast well against the many dark skinned and half naked Nobades.

Painting
I undercoat all my figures with a matt white which is helpful when painting with thin coats of paint. Tunics were given a mid-grey, beige or saffron wash and this was followed by painting the folds in the clothing a dark grey. To finish the clothing, I used thinned white to highlight the raised parts of the clothing, turban and breeches regardless of the ground colour.

Shields are painted in light tones and dry brushed giving the overall effect a uniform appearance.

Banners
I found depictions of early medieval banners with a cross motif and decided to simplify the design for the commander's banner. I had planned to add more and smaller flags to help identify the blade (2 x 4Bd) from the single auxilia (4Ax), but these plans were placed on hold as the number of armies to paint were a higher priority.
I still may add them at a later date. 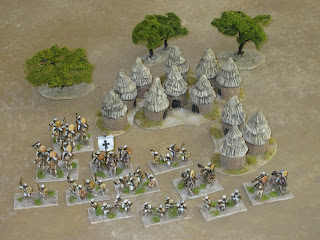